The legendary Rolex GMT-Master owes its iconic status mostly to its bi-color 24-hour bezel, which can display a second time zone. Especially the red / blue "Pepsi" coloring inspires watch fans and jetsetters all over the world! Buy your GMT-Master vintage or certified-pre-owned.  More 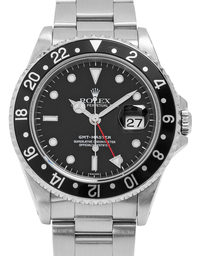 In addition to pre-owned Rolex GMT-Master watches, the Watchmaster online shop offers a large number of luxury watches of major international brands as well as medium-sized and small German companies at comparably low prices. You can either pay for your new wristwatch quickly and easily by credit card or PayPal or opt for long-term financing. The payment can be adjusted individually in small instalments. The shipping is insured. During the entire purchase process, our customer service will be pleased to assist you at any time and inform you about further possibilities. 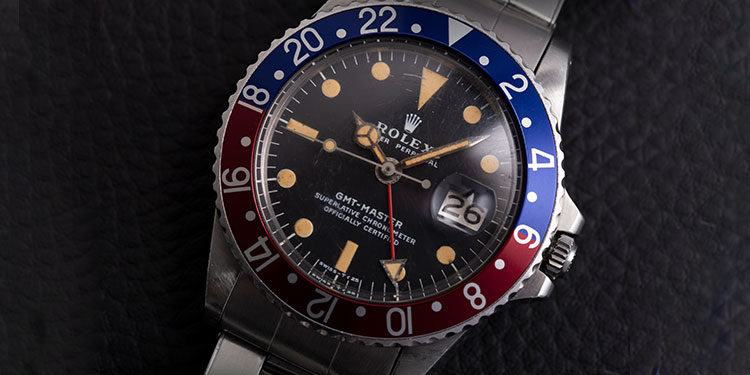 Why a GMT-Master watch is perfect for the cockpit

The GMT-Master, and along with it many other Rolex series, was initially developed for professional use. Thanks to its 24-hour bezel, the GMT-Master can point out a second time zone with an extra hand, making it perfect for use in the cockpit. Its striking design and high functionality make it popular far beyond the circles of connoisseurs, making them one of the Rolex flagship models.

Rolex GMT-Master watches and their prices

Here is an overview of the references produced between 1954 and 1999 and their main differences: 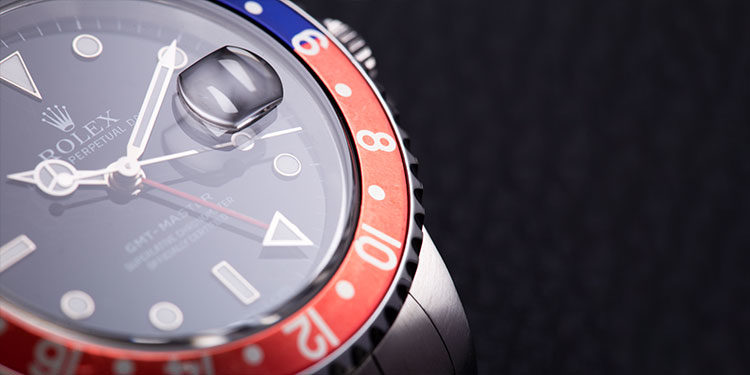 The history of GMT-Masters and their references

There are rumours that the Rolex GMT-Master was allegedly inspired by a proposal request issued by the luxury airline Pan American Airlines (PanAm), to which Rolex applied. It does not matter if it's true or not, it is clear that the watch is still closely associated with PanAm today. When the wristwatch was introduced in 1954, it was primarily geared to the needs of the pilot and onboard crew. While expanding the airline network, these flying personnel flew more and more routes and faced new challenges. Pilots and crew on PanAm flights were equipped with GMT-Master, as they could read the time at the point of departure as well as in the destination country at any time on its 24-hour bezel. It is best known for its two-tone bezel in blue-red, which is called "Pepsi" bezel because of the colour combination which reminds of the famous soft drink brand. The two different colors mark day and night and are a striking recognition feature of the series.

The "GMT" in the name stands for Greenwich Mean Time, the mean solar time at the Greenwich meridian, which was previously considered world time, before it was replaced in 1972 by the currently used UTC (Coordinated Universal Time).

Meanwhile, the Rolex GMT-Master has been replaced by the GMT-Master II, so it is only available in a used condition or as a vintage model. In addition to the iconic “Pepsi" design, it is also available with a full black bezel or black and red bezel, known as GMT-Master "Coke". 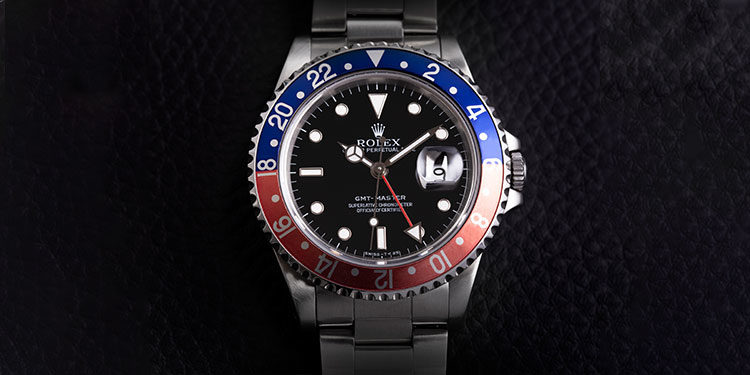 Why do bezels of the GMT-Master fade?


As the GMT-Master is best known for its eye-catching bezel, its condition is an important criterion in the evaluation of vintage watches. In the case of the "Pepsi" bezel, however, the red part of the bezel may fade, the so-called "bezel fading". By sunlight, it turns rose to pink. What could be a blemish, however, aroused great enthusiasm among Rolex collectors and makes the watch even more valuable today: The more uniform the bezel is discoloured, the more collectors will offer. Vintage models with nice fading are rare, as they were often replaced with new lunettes. However, one should be careful that the ageing process of the bezel is genuine and not artificially accelerated by the use of chemicals. When buying certified, used luxury watches from sellers like Watchmaster, you're on the safe side.

The GMT-Master in film, art and revolution

As an absolute icon among the Rolex watches, it is no wonder that you are in good company with a GMT-Master on your wrist. On one hand, it convinces with its high functionality: If you travel a lot or for professional reasons have to deal with different time zones, the watch is ideal for you. At the same time, it has a high recognition value due to its unmistakable bezel and quickly became famous outside of the circles of flying personnel as well. Its most famous screen appearance was in the James Bond movie "Goldfinger" on the wrist of the character Pussy Galore, incarnated by actress Honor Blackman, who wears a Rolex 6542. Orlando Bloom was also photographed often with his vintage GMT-Master 1675 with "Pepsi" colouring.

Another famous model was worn by Che Guevara, who was said to have been given the ref. 1675 by Fidel Castro. Even the world-famous painter Pablo Picasso had a weakness for watches. In his private collection was also a GMT-Master 1675 with "Pepsi" bezel. 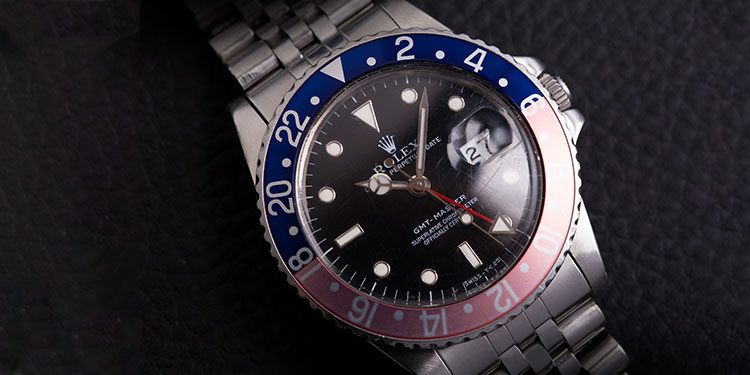