Seiko is a synonym for excellent and innovative watchmaking from Japan. Especially with their movements, the brand revolutionizes the market again and again. Highlights include their kinetic- and solar watches, which are widely acclaimed and loved worldwide.  More 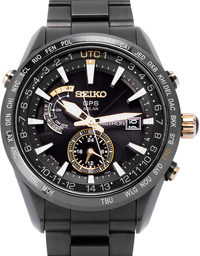 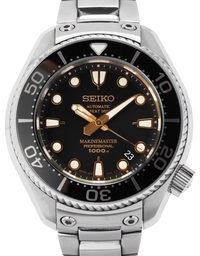 In addition to common luxury watch brands, we also offer you in our online shop others such as certified pre-owned watches from Seiko. The purchase of a used high-quality Seiko wristwatch is worth financially compared to the new purchase, so it's possible to buy a Seiko watch at a low price online. We guarantee the authenticity of the watch with a certificate. Have you already decided for your Seiko model? Then simply inform yourself online or through our customer service about the different payment options. The payment is possible by credit card or PayPal and for individual planning we also offer flexible installment plans. If you have further questions about the shipping or purchase conditions, please contact us!

In addition, Seiko has been able to claim itself as an integral part in the world of sports for over half a century. As an official partner of major events, the watch brand is known and loved globally. Seiko has been present six times at the Olympic games, four times at the FIFA World Cup and twelve times at the World Athletics Championships. The company also maintains some partnerships with the top athletes of our time: Athlete Darya Klishina and Novak Djokovic are official brand ambassadors of Seiko.

The most popular Seiko watch series


Seiko prices and models at a glance

Is it worth investing in pre-owned or vintage Seiko watches?

Seiko looks back on over 100 years of watchmaking history. Above all, special editions or limited editions, but also no longer produced references are often worthwhile as an investment. Because of their limited number of specimens they have a constant increase in price. Seiko watches have a relatively high price range and it can be promising, especially for more expensive models, to look for used pieces, to buy a Seiko for cheap.

The history of Seiko

Seiko's story begins as early as the late 19th century. In Ginza, Tokyo, in 1881 when the 22-year-old Kintaro Hattori opened a small shop selling and repairing watches. Only 11 years later, the former Seikosha watch brand is created out of this small business. "Seiko" is Japanese for "exquisite", "minute" and "success", "sha" means house. With the presentation of the Laurel watch in 1913, the brand wrote Japanese watch history: it was the country's first wristwatch.

Seiko achieved its big breakthrough in 1960 with a series that is still the heart of the brand: the Grand Seiko. In the next few years numerous innovations followed such as the first wristwatch with stop function in 1964. A year later the first Japanese diver's watch was launched. Five years later, Seiko was able to score with the presentation of the specially developed caliber 6139: The world's first automatic chronograph with vertical clutch was born. This construction became standard in Switzerland 20 years later. In the same year, Seiko launched another world first: the Astron, the world's first quartz wristwatch. This watch was also the core cell of the later quartz crisis, which would bring the Swiss watch industry into a severe depression.

In the early 1970s, the watch brand’s engineers worked consistently to combine the energetic effectiveness of mechanical and automatic watches with the accuracy of quartz watches. The breakthrough came 1988: the Automatic Generating System (AGS or A.G.S.), later referred to as the “Kinetic System”, was introduced with a built-in generator that generates electricity through the arm movement similar to a mechanical automatic watch. To achieve the maximum power savings, the Auto Relay System ensures that the quartz watch stops when it is not worn and automatically adjusts to the current time and date only when in motion. Due to this smart construction it has a sensational power reserve of four years!

Another innovation comes from Seiko in 1999: the Spring Drive technology replaces the weakest part of a traditional mechanical movement, the escapement. It makes it possible to regulate the course of a mechanical movement through a quartz crystal. The battery replacement is thus unnecessary.