A tribute to the first diving watches by the brand, the Tudor Black Bay Fifty-Eight draws on the aesthetics of the 1950s.  More 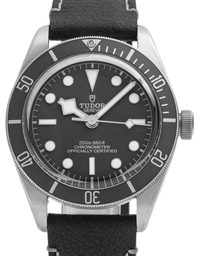 The Tudor Black Bay 58 bridges the grievous gap between the captivating charm of the past with the first diving watches made in the 1950s and state-of-the-art technology and its correspondingly high production standards. If you are interested in purchasing a current model instead of a vintage watch, a Black Bay Fifty-Eight is a wise choice. They offer an impressive, modern reinterpretation of the classic look of a vintage diving watch.


If you have decided to buy a used Tudor Black Bay 58 from our online store, there are several options for payment available. Either pay the purchase price in one lump sum by credit card, PayPal or bank transfer, or opt for convenient online financing. Once your order has been completed, your pre-owned Black Bay 58 will be on its way to its new home as soon as possible.


What characterises models from this collection?

The optical attributes are the unique selling point of this collection. Featuring a round, stainless steel case with a diameter of 39 mm and a unidirectional rotating diver's bezel, the Tudor Black Bay Fifty-Eight is impressive even without any additional complications and holds its own thanks to its water resistance of 200 metres and a thoroughly sporty design. Whether on a riveted steel, textile or leather bracelet, Black Bay 58 models stand out thanks to outstanding functionality and an appearance that is reminiscent of Tudor's first diving watch from 1958, the "Big Crown" (Ref. 7924). The namesake big crown is found on the right side of the Black Bay Fifty-Eight's case as well and foregoes any crown protection system due to its size.

With its black dial, black bezel, snowflake hands and gold indices as well as bezel markers with a vintage patina finish, the Black Bay Fifty-Eight is an excellent choice particularly for fans of retro-style watches. The moderate, 39 mm case size makes it suitable not only for men, but also for women. The manufacturer offers the Tudor Black Bay 58 in blue for anyone looking for a touch of colour on their timepiece. That means that anyone searching for a blue bezel paired with a blue dial should check out these models. Furthermore, there are new models available in brown, matte green and taupe dials as well.

Driven by the 26 mm manufacture calibre MT5402, these watches faithfully display the hours, minutes and seconds to their wearers. This robust, reliable calibre has a power reserve of up to 70 hours and boasts COSC certification.

If you are interested in buying a used Black Bay Fifty-Eight, but are unsure which model should grace your wrist in the future, perhaps this summary may be of help. Here is a closer look at both blue and black watch models and their prices on the pre-owned market.


A look to the past

The Black Bay Fifty-Eight is named after the year 1958, when the brand's first diving watch that was water-resistant up to 200 metres was released. This watch was released under the reference 7924, but is known by the nickname "Big Crown" and was the main inspiration for the new Black Bay 58 models. In 1969, a splash of colour was introduced into this range of diving watches when a watch with a blue dial and bezel was released. Other sports watches in the collection soon followed in blue and instantly became the signature colour that would later become known as "Tudor Blue."

In the 1970s, the French Navy adopted "Tudor Blue" for its diving watches. With its navy blue dial and colour-coordinated bezel, the Black Bay Fifty-Eight "Navy Blue" is designed to be reminiscent of these models.


Beckham and the Black Bay 58

As a testimonial, brand ambassador and prominent face for the brand, the soccer star David Beckham was one of the first to wear a model of the Tudor Black Bay 58. He expressed enthusiasm for the blue colour highlights on the Fifty-Eight over social media and proudly shared the fascinating watch on his wrist.


Other collections by Tudor