With a purchase of a Zenith El Primero, you not only select a brand rich in tradition but also buy one of the most accurate movements in the world.  More 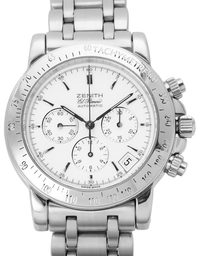 The El Primero – from vintage to modern

Half a century after its introduction, the El Primero caliber is still the most accurate chronograph movement produced in a series. Zenith's El Primero Collection celebrates this success story with a wide variety of exquisite timepieces.


What makes the El Primero so special

If you are considering investing in a Zenith El Primero watch, you can choose from a wide range of different models. In addition to the current collections, it is always worth taking a look at second-hand El Primero watches, because the heart of every model is the legendary El Primero calibre.

When the construction of the movement was started in the 60s, the aim was to create a movement that could be operated without additional modules. The movement was designed around a ball-bearing central rotor and a column wheel. This was supposed to ensure, that the self-winding mechanism could produce the maximum drive. This construction method proved to be successful because a special feature of this movement is its high frequency of 36,000 half oscillations per hour. This means that the seconds and chronograph hands advance very smoothly, in jumps of a tenth of a second. Simultaneously, the high number of oscillations also reduces the susceptibility to gravity or shocks. In spite of the high performance with which the movement runs, the El Primero has a power reserve of up to 50 hours. In addition to the movement, the design of El Primero watches has also been popular among watch enthusiasts and, despite some modifications over the years, has always remained true to its basic form. The winding crown and two pushers for the start-stop function are located on the right side of the case. The tachymeter scale to measure the speed of an object is either located on the bezel or directly on the dial.

It is possible to buy a pre-owned El Primero with various complications. The classic version is one with three totalizers for the small second, the 30-minute counter and the 12-hour counter at 3, 6 and 9 o'clock. However, you can also opt to buy an El Primero with a moon phase. The date display is diagonally between 4 and 5 o'clock or straight at 6 o'clock. Originally designed for a case diameter of 38 mm, the El Primero line has been expanded to offer watches with a diameter of 42 mm. This makes it possible to consider the purchase of an El Primero regardless of wrist circumference.


How much does a used Zenith El Primero cost?


The eventful history of the El Primero

From a calibre to a collection


When discussing the history of the El Primero collection, there is no way around telling the story of the movement bearing the same name. In 1962, Zenith began working on a model that was to be something special. For the company's 100th anniversary, they wanted to unveil the best chronograph in the world. This undertaking was successful – albeit only a few years after the anniversary. Nevertheless, the company had been faster than its competitors. A consortium of Breitling, Heuer, and two other watch manufacturers also wanted to introduce the first self-winding chronograph. Zenith, however, presented its El Primero at the beginning of 1969, while the competition only announced its result in the form of the Chronomatic 11 in March of the same year. The name of the El Primero movement, "the first", was to remain a program.

The popularity of the high-speed movement grew steadily, as many major watch manufacturers were convinced of the calibre's technical capabilities and incorporated it into their own chronographs. The best-known example of this is probably Rolex, who used the El Primero in their Daytona. However, they lowered the frequency of the oscillations to 28,800 half oscillations. Despite its undisputed quality, the El Primero and its technology would have almost disappeared from the picture forever.

In the 1970s, Zenith was acquired by the American Zenith Radio Corporation, which wanted to concentrate on the distribution of the quartz movements that were popular at the time. Thanks to an employee who did not destroy the construction plans, movements, tools, and machines used to make the El Primero, but instead hid them, it was possible to start building the extraordinary calibre again after Zenith was sold to the Swiss group Dixi. This is also where the history of the El Primero Collection begins. Zenith continuously improved the movement and simultaneously reduced the wear and tear of individual parts. After Zenith became part of the luxury goods group LVMH, Zenith was promoted as a movement supplier within the group and the El Primero and its collection became the flagship of the brand.


To test the durability of the watch, a model of the El Primero was strapped to the landing gear of a Boeing 707 in 1970 and the Air France flight AF015 was to take the watch from Paris to New York. The timepiece survived the flight as well as the extreme temperature differences of +4 to -62 degrees Celsius without damage or any loss of accuracy.

More than 40 years later, a watch from the El Primero series once again proved its ruggedness. This time, however, the El Primero Stratos Flyback Striking 10th was not mounted on a chassis, but was on the wrist of Felix Baumgartner, making it the first chronograph to break the sound barrier. In this daring attempt to be the first to break the sound barrier, man and watch are exposed to extreme acceleration, altitude, pressure and temperature differences. When Baumgartner landed safely in the New Mexican desert after his 9-minute jump, his El Primero watch also functioned perfectly.