With the Jaeger-LeCoultre Reverso, you can protect your time with a single turn. A milestone in art deco style, the Reverso offers room for personal engravings on the back.  More 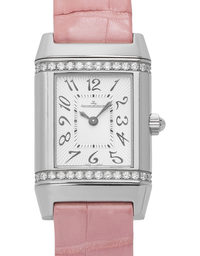 How does one introduce a series that has already made itself a legend? With the Reverso, the Swiss watch manufacturer Jaeger-LeCoultre not only revolutionized watch design, but also cemented its own reputation as a luxury watchmaker. The hinged, reversible case continues to enchant today as it did then, and over the years has been enriched by numerous complications and refinements.


How the Reverso brought the art deco style to Haute Horlogerie


When Jaeger-LeCoultre launched the Reverso series in 1931, it clearly stood out from the watches of its time. The design of the watches was still influenced by the design of the military watches of World War I and many manufacturers were slow to embrace the idea that a watch could also be art. René-Alfred Chauvot, the designer of the Reverso, was strongly inspired by the art deco trend, which brought the urge for decoration into Haute Horlogerie.


The visual and technical aspects of the Jaeger-LeCoultre Reverso


The most striking feature of the case of Jaeger-LeCoultre Reverso watches is to this day the gadroon – three curved ornamental borders that extend horizontally across the top and bottom of the case. Designer Chauvot based the dimensions of the case on the "golden ratio", which is an expression for perfect harmony and thus also known as the "divine proportions". It measured 36 mm from bridge to bridge and had a diameter of 22 mm. It was only in 1991 that Jaeger-LeCoultre introduced a new size, dividing the range into three models:


The history of the Reverso series' movements is also fascinating. Today, Jaeger-LeCoultre is one of the few watchmakers to entirely produce its own movements. However, in the beginning, the Reverso still required the help of a supplier. Thus, the first generation of movements was supplied by Tavannes and marked as "Lisica" before being finished by Jaeger-LeCoultre. But the connection to Tavannes goes even deeper. In 1928, Tavannes introduced an aesthetic precursor to the Reverso with a belt watch. Made for the then Prince of Wales and future the King of the United Kingdom, Edward VIII, the watch concealed its dial in a belt buckle so that he could wear it while playing golf. In 1933, Jaeger-LeCoultre began to produce its first in-house movements and its relationship with Tavannes ended. By World War II, 11 different movements had been designed. Meanwhile, the series has more than 30 of its own calibers.


The history of the Jaeger-LeCoultre Reverso


The origin of the Jaeger-LeCoultre Reverso is a little more complicated than usual. César de Trey, a British watch merchant, saw a gap in the market. In the 1930s, watches were by no means up to today's standards and the crystal glass was very fragile. De Trey had the idea to design a watch with a solid, reversible case back that would protect the watch. He shared his idea with his supplier Jacques-David LeCoultre, who, together with his partner at the time, Edmond Jaeger, passed on the design concept to Parisian designer René-Alfred Chauvot. Chauvot began to work on the design of the watch and applied for a patent in 1931. The movement was refined by Jaeger-LeCoultre and was designed in-house starting in 1933. It is said that this watch was particularly in demand among British polo players in India and that Jaeger-LeCoultre marketed the Reverso as the first "sports watch".


Complications for the Reverso


The Reverso series held its place in Jaeger-LeCoultre's catalog for a long time before being discontinued during the quartz crisis. Once again, it was up to a supplier to save the series. An Italian watch dealer discovered 200 unused cases, had them fitted with movements and sold them to the Italian market. He thus proved that there was still a great demand for art deco style models. As a result, the Reverso was reissued as the Reverso II in 1982 and offered with both mechanical and quartz movements.

Although the Jaeger-LeCoultre Reverso had reappeared in the catalog, it was not until 1990 that it would return to its former glory, when new CEO Günter Blümlein and Chief Designer Janek Deleskiewicz made the decision to make the Reverso the brand's flagship once again. This was achieved by introducing new sizes and a stronger focus on complications. The first was the "60ème" with a transparent back (1991), followed by a tourbillon (1993), a minute repeater (1994), a retrograde chronograph (1996) and a perpetual calendar (2000).


However, the real coup came with the Jaeger-LeCoultre Reverso Duo Face in 1994, a GMT watch that further exploited the Reverso's potential. Until then, the back of the case was kept free for a personal engraving for the wearer. The Duo Face uses this space for another dial with a second time zone. In order to implement this technically, the Caliber 854 was created, which powers both sides simultaneously. From the moment the Duo Face was born, Jaeger-LeCoultre has used this space for increasingly audacious complications and ideas.


The Reverso displays innovation and endurance


As with every flagship series, Jaeger-LeCoultre began to expand the Reverso Series over the next few decades and to reference itself. Throughout the 2000s, the range became more sporty and split into a range of sizes and distinctive special editions. With the Reverso Grande Complication à Triptyque's launch in 2006, Jaeger-LeCoultre released the first watch with three dials. The first Reverso with an automatic movement followed in 2014. In 2016, the Reverso Classic was unveiled at the Swiss Watch and Jewellery Show SIHH. The Reverso Classic was once again based on the scale conceived in 1991 and changed the name from "Classique" to "Classic".


Jaeger-LeCoultre – a brand of the stars

From Pierce Brosnan to Leonardo DiCaprio


Jaeger-LeCoultre is one of the most popular brands in Hollywood for a reason. The list of actors who have not been spotted with a Reverso is probably shorter than the list of those who have adorned their Jaeger-LeCoultre Reverso watch: Pierce Brosnan, Leonardo DiCaprio, Matt Damon, Christian Bale, Michael Douglas, Clive Owen, Adrien Brody, and Jamie Foxx are just a few prominent owners of a Jaeger-LeCoultre Reverso. The best combination of Reverso and character is probably Jon Hamm in his role as Don Draper in "Mad Men". The series has seen many watches come and go, but the Reverso has always clung to Hamm's wrist. Jaeger-LeCoultre also has a connection to the royal family. Edward VIII relied on the Reverso as would Queen Elizabeth II.


Other interesting series by Jaeger-LeCoultre

* Terms and conditions apply
All prices include VAT. If differential taxation in accordance with §25a UStG is applicable the VAT will not be reported separately.
Watchmaster ICP GmbH | Charlottenstraße 60 | 10117 Berlin | Germany
© Watchmaster ICP GmbH
# b1517f5c4