The Panerai Radiomir shines not only because of its namesake's fluorescent material, but also thanks to its sandwich dials, which are highly valued by collectors. Radiomir's proprietary calibers ensure that you never run out of time.  More 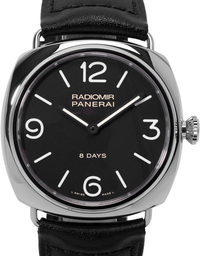 Dive into the history of the Panerai Radiomir

The Panerai Radiomir series is more than just a historical footnote. While the watch brand is known today primarily for the Luminor, Radiomir set the standard for Panerai as early as the 1930s. The Radiomir was the first watch that could be read underwater and solidified the brand's partnership with the Italian Navy.


The Radiomir series: Innovations from the Laboratorio di Idee

It is not without reason that Panerai today has named itself the "Laboratorio di Idee", or the "laboratory of ideas". The drive for research and innovation has always been in the brand's blood. In addition to the well-known sandwich dials, the Panerai Radiomir offers another historical innovation. This was the first watch made with plexiglass. Whereas plexiglass is mainly associated with inexpensive watches today, it was considered revolutionary in the 1930s. Unlike glass, which simply shattered when subjected to a certain amount of pressure, Plexiglas was perfectly suited to the depths of the sea. Today, however, Radiomir watches are naturally equipped with sapphire crystal and worn with a fine black or beige leather strap. Visually, the military green dials of the new Radiomir models retain the classic, elegant style of the early monochrome dials.

The design of the Panerai Radiomir watches is strongly influenced by the oyster case from Rolex. A few years ago, "Paneristi" found a model with the Ref. 2533, which is almost identical to the Panerai Radiomir in design down to the last detail, in a 1935 Rolex catalogue. This has been confirmed by James Dowling, one of the world's most famous Rolex experts. None of these models was ever produced by Rolex, so it is still not known how this model ended up at Panerai. However, the renowned crown protector – today the trademark of Panerai – was only introduced with the Luminor. Panerai eventually began producing its own cases in 1940.

The calibre 618 supplied by Rolex was phased out over time. While Panerai had been sourcing the calibres predominantly from ETA since 1997, a switch to proprietary calibres took place in 2002. In 2018, Panerai succeeded for the first time in only issuing watches that were equipped with its own movements. This step towards in-house production can also be seen in the current Radiomir models, which are equipped with the calibre P.3000 and calibres from the P.40XX series.


How much does a pre-owned Panerai Radiomir cost?

The history of the Panerai Radiomir

From the Italian Navy to Rolex

Panerai's history has been closely linked to the Italian Navy from the beginning. As part of this partnership, research was also undertaken for new innovations to the beginning of the 20th century, leading to the debut of the first Radiomir watch in 1916. This made use of a radium-based powder that gave the dials their idiosyncratic glow and improved legibility. Panerai even patented this fluorescent material.

The Radiomir gained popularity so quickly that the Navy approached Panerai again in 1936 and asked whether a water-resistant version of the watch could be created on the basis of the Radiomir. They equipped themselves for the upcoming world war and were urgently looking for large, easily legible diving watches. The plan was to equip the combat divers, who had to navigate the newly developed manned SLC torpedoes underwater.

Panerai turned to Rolex for help, who had already launched their famous Oyster case in 1926. Rolex provided Panerai with an enlarged Oyster case and installed the calibre 618 in it. Panerai put its patented luminescent dial inside and thus the Radiomir was born. Panerai offered this first series in 10 variants to tailor it more precisely to the needs of the navy. A little known fact is that Panerai not only produced for the Italian Navy, but a few models were used by German combat divers as well.


An innovation from Panerai: The sandwich dial

Panerai debuted the sandwich dial in 1938, which is still celebrated by Paneristi today. Its classic version consists of two layers. The lower layer is coated with the luminous material. The upper layer, i.e., the dial with punched-out indices and the numbers 12, 3, 6 and 9 are applied on top. Paneristi are certain that this makes the dial even more legible. However, Panerai was not the only brand to use this technique but is still most associated with this style today. In 1940, Panerai finally began producing its own case. This was cast in one piece and could withstand even further depths than the Oyster case.


The end of the Radiomir as a new beginning

The temporary discontinuation of Radiomir also represented progress. When the radioactivity of radium, used as a fluorescent material for the watches, became a problem after World War II, Panerai switched to tritium and presented the Luminor in 1949. At that time, it was not yet known that tritium was also radioactive, but it was much still less intense than radium. After Panerai was revived by Richemont, they also focused on their own past history and now offer a new edition of the Radiomir as a tribute to the classic models. Today, the series consists of four models ranging from 45 to 48 mm in diameter, some of which are also equipped with a GMT function. Special editions, such as the Radiomir 47 mm, are occasionally also produced.


Notable owners of a Panerai Radiomir

Panerai has always been a brand of the stars. Sylvester Stallone propelled the brand into the mainstream and Damien Hirst brought it to the galleries of the world with his work of art "Beautiful Sunflower", which consists of numerous Panerai dials – including some of the Radiomir. This diversity is also reflected in the owners of the Panerai Radiomir. The musician André 3000 wears a Radiomir watch, as does the professional diver Guillaume Néry, who always pushes the limits of his capabilities. However, the Radiomir has also attracted the attention of female wearers, including top model Heidi Klum.


Other interesting series from Panerai