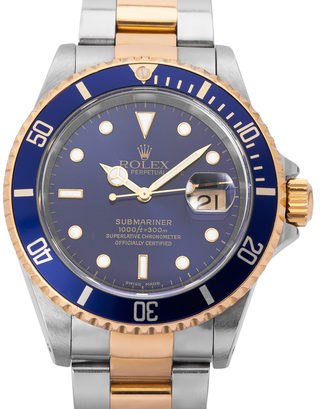 Request now your own Rolex Submariner 16613.

Buy a Rolex Submariner 16613 - the watch for decision-makers

Like a dip into ice-cold water, this luxury watch is for people who dare something.
Because: The Submariner 16613 is striking! Although Rolex had the name Roselor Design protected as early as 1933, the watchmaker introduced the 16803 model the first time in 1983. It took a creative approach to the hitherto unusual mixture of steel, gold and blue. Four years later, when the Rolex 16613 was launched as the successor, the venture had already fully proved to be successful. Equipped with the new 3135 caliber, a triumphal march began that lasted for twenty years.

Undoubtedly, the Rolex Submariner 16613 can be described as one of the stylistic icons of Rolex. With the 116613LB and 116613LN version came a new successor on to the market in 2004. With some improvements on the clasp, the famous cerachrom bezel and a larger dial. Many fans of the series were surprised by the changed color scheme and the "snobbish" appearance of the newcomer. Not surprisingly, the demand for certified pre-owned Rolex 16613 models has increased enormously.

3 Reasons to buy a second-hand Submariner 16613


This is what a classic is made of: The look and technology of the Submariner 16613

A best fitting word to the appearance of the Submariner 16613 would be: Royal.
Its blue, hand-crafted sunburst dial boasts a clear, symmetrical appearance with luminescent stick indices that protect an 18-karat gold coating from tarnishing. At 3 o'clock is the classic date window which is highlighted by a magnifying glass. The bezel, in the same color as the dial, can be turned to one side, which provides the ability to accurately measure the time used for decompression dives. The protective sapphire glass has an iridescent effect which is highly appreciated by connoisseurs and collectors of the brand.
The Oyster bracelet, made of stainless steel and yellow gold, ensures a comfortable fit and a safe adaptation to the individual needs of its wearer. The case is waterproof up to 300 m and withstands a water pressure of up to 30 bar. The movement is a caliber 3135, which accounts for much of the brand's reputation for accuracy and robustness. The used Parachrom spiral makes the watch insensitive to vibrations and temperature fluctuations.
Particularly noteworthy is the Rolex rotor, which has bearings made of synthetic rubies. This reduces the wear and tear to a minimum. These features are also rewarded by the independent Swiss testing institute COSC with its certification.

How much does a used Rolex Submariner 16613 cost?

There are many different models of the Submariner series. Here is a price overview of used Submariner 16613 and other models in this series cost.

More interesting watches made by Rolex

If you are looking for other cheap Rolex models, you should take a look at the following references: The Rolex Deepsea ( Ref. 116660) is the record holder among the divers' watches. With a water resistance of up to 3,900 meters, it is the ideal companion for missions to the deepest parts of the ocean. Famous bearers include the director of “Titanic” James Cameron, who wrote history with the variant D-Blue and the deepest solo dive in history.

With a Yacht-Master (ref. 116622) you swap the submarine for a sleek sailor. From the deep connection of the company to sail sport, the Yacht-Master series was developed. Because of its robustness and technical specifications it has become an indispensable instrument of professional skippers. The Yacht Master 40 comes with the Rolex patented Everose alloy and a chic black dial.

Ninety years old and not aged by a day? This dream is embodied in the Rolex Oyster Perpetual (Ref. 77080). The successor to the first waterproof Rolex from 1926 is characterized by a renunciation of everything superfluous and a focus on the exact indication of time.

Rolex's Submariner models are often referred to as unique and unsurpassed in their field.
The iconic design and technical specifications of the Submariner are often copied rather than really challenged by other watchmakers.
But this is different with Omega and its Seamaster Diver 300M (Ref. 210.30.42.20.03.001). Twenty-five years ago, the first model appeared, quickly gained a loyal fanbase with its novel optical design and high mechanical value.
2018 the company released a new model with innovative, new features. Its advertising campaign was ready to tease against Rolex. Omega hired the current James Bond actor Daniel Craig as a testimonial, presenting the watch as the new chronograph of the man, the Queen trusts. The dial has the popular, now laser engraved, wave design and is made of ceramic. For permanent radiance and resistance, the bezel is coated with enamel. Similar to the Submariner, the watch has a high water-resistance. As a special feature the patented helium escape valve is now conical and thus perfected for underwater use, making it the perfect choice for every professional deep sea operation.
With 1,930 € , a used Omega Seamaster 300m (ref. 2541.80.00) is much cheaper than a Submariner and could thus move the inclined customer towards Omega. Of course, this does not have to be a final decision, or as the famous double-zero agent said: Never say never!
What our customers say about us

* Terms and conditions apply
All prices include VAT. If differential taxation in accordance with §25a UStG is applicable the VAT will not be reported separately.
Watchmaster ICP GmbH | Charlottenstraße 60 | 10117 Berlin | Germany
© Watchmaster ICP GmbH
# 60ad4d1a7

About our Rolex Submariner 16613