Having already taken a look at watch boxes from Breitling, Omega and TAG Heuer, we would now like to take a look back in time at the evolution of Rolex's watch boxes.


The right accessory for a watch

People who decide to buy a pre-owned Rolex tend to seek not only the watch but the warranty certificates that accompany it as well. More often than that, most prefer to buy a full set, which means the watch in its original box, including all the paperwork. Similar to the service record of a used car, the documentation about the servicing of a luxury watch provides information about the maintenance and repairs carried out or, for example, the replacement of individual components. That's why it is reasonable that a timepiece including the accompanying documentation offers a higher return upon resale than a watch without any accessories. With the right watch box, the entire package is rounded out. Compared to a lone Rolex, a full set fetches prices that are on average up to 10% higher. 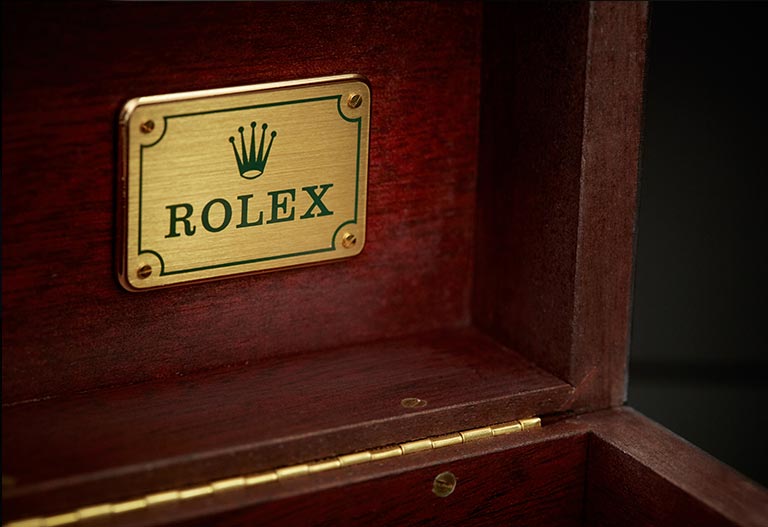 The evolution of Rolex's boxes

Certain buyers are only interested in the watch. After all, it is the watch that is worn in the end – and not the box. However, many collectors' hearts begin to race as soon as they get their hands on a Rolex with its box and papers. That's why we'd like to take a moment to focus on the subject of watch boxes and the evolution of Rolex boxes.

The first boxes in which Rolex sold its watches were made of wood covered with green leather. Inside, there was a wooden panel covered with green velvet. This rested at an angle in the box and had two slots where the watch was displayed. On the wood inside of the lid, the Rolex logo, the crown and the lettering "ROLEX" are emblazoned in rich green. These boxes were used until the beginning of the 1980s, then a small change to the watch boxes followed. 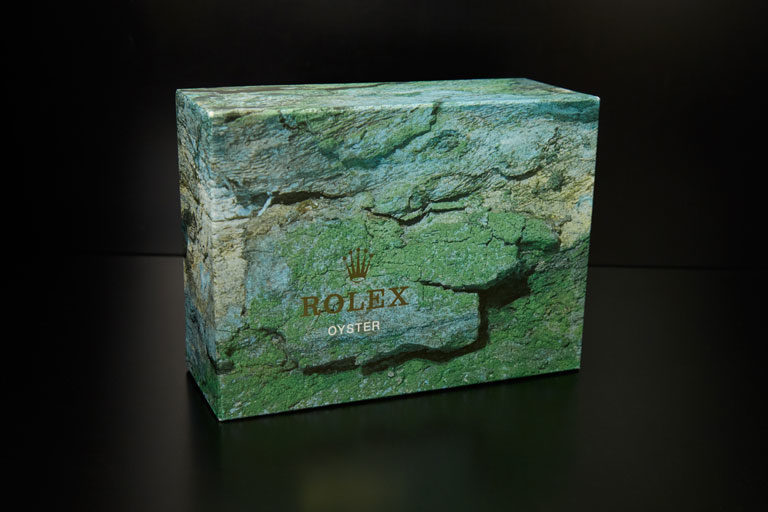 The exterior of the new boxes remained a wooden box covered with green leather, wrapped in a green patterned cardboard box. But inside the Rolex box, the colour scheme had changed: the previous green velvet panel has been replaced by a panel in a beige-brown tone. This makes the interior of the box look very harmonious, as the velvet was approximately the same colour as the bare wood of the box's interior. The slots that hold the watch in place have been replaced with a retaining clip of the same colour. The clip is firmly mounted to the panel, allowing the timepiece to be perfectly mounted and displayed. 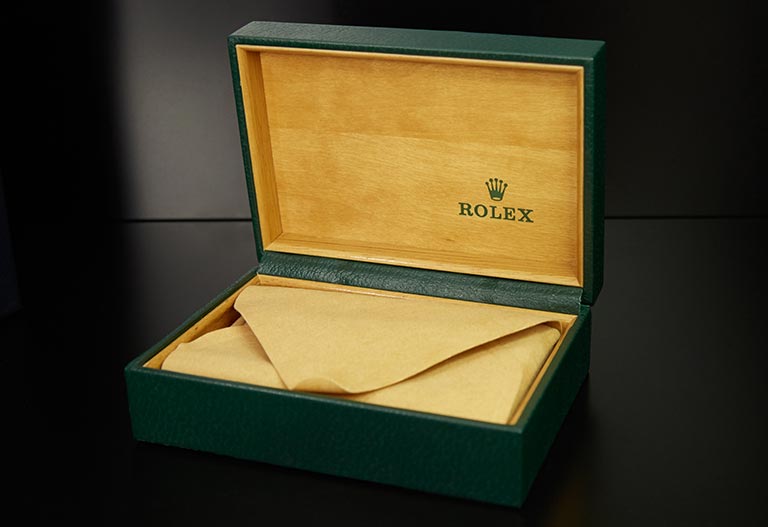 From 1990 to 2005, Rolex men's watches were housed in the trademark green box with velvet cushions inside and a wooden outer shell. The brand logo was prominent, yet understated. After 2005, the wooden box was completely discontinued. During this period, Rolex also used a different box made of wood with red interior lining and cushions for its women's models. This box has also ceased to be in use since 2005.

In 2005, Rolex introduced the renowned green wave box design for its watch boxes, which is still in use today. The redesigned boxes were developed for modern models for both men and women. It is available in three different sizes. The lid of the box is emblazoned with the gold Rolex logo and the five-pointed crown. Upon opening the lid, the watch can be found inside on a pistachio-coloured cushion. The rest of the interior of the box is also in this colour tone. On the inside of the lid, which opens to 90 degrees, the Rolex crown is visible with the word "ROLEX" directly below.

There are a few specifics behind the three different box sizes:

The design of the outer packaging has also changed over time. The formerly green patterned box has given way to a more contemporary version. This new version is now more subdued and echoes the colour of the inner lining of the actual watch box. The lid of the box is adorned in the centre with a relatively large, and yet unpretentious, Rolex crown. 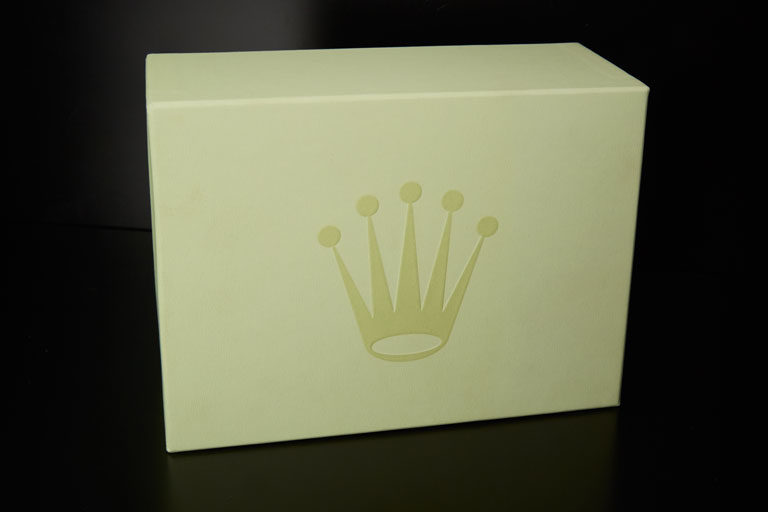 Rolex boxes from 2013 to present: A little cosmetic reworking

In 2013, Rolex again made a few minor cosmetic changes to the design of its watch boxes. However, the different sizes and their applications remained the same. The green exterior of the box has a slightly brighter look in comparison and the interior is beige. The logo on the inside of the lid has changed as well. The crown remains gold, but the lettering "ROLEX" is now in the same green tone from the box's exterior, forming a strong contrast to the beige velvet lining. The compartment for holding the warranty card and other papers is integrated into the lid so that when the box is opened, only the watch can be seen. This makes the inside of the box look even tidier. 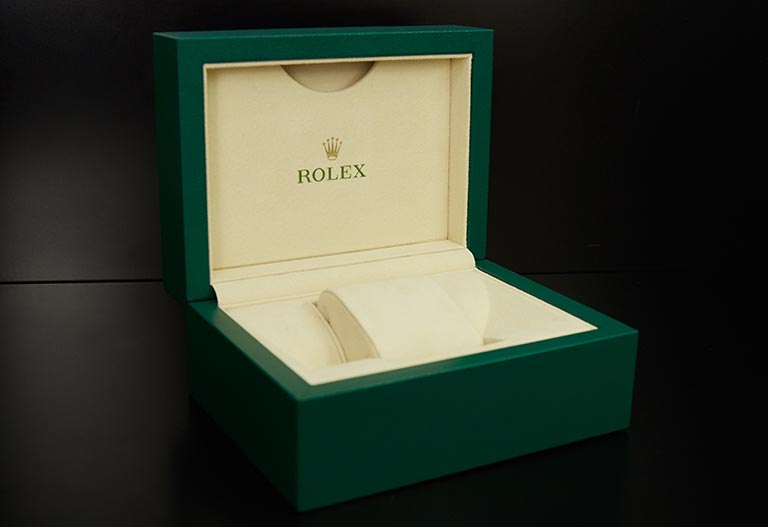 In summary, the box's new design is an aesthetically pleasing, if only subtle, update by Rolex that enhanced the practicality of its boxes. Admittedly, Rolex has never been known for extremely ornate boxes, but after all, one wears the watch and not the box. 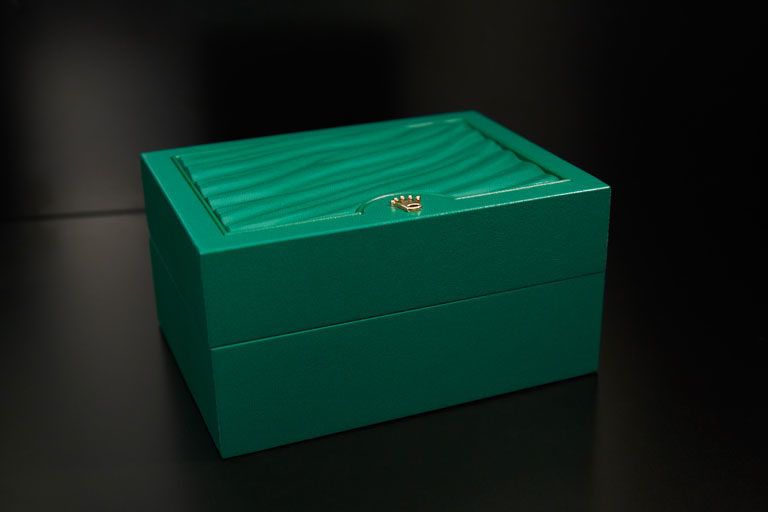 Caution should always be exercised when buying a watch privately. In addition to the problem of unintentionally buying a fake Rolex watch, another issue can arise when making a private purchase. In order to sell a timepiece that is missing the original box as a full set at a greater profit, some dubious sellers may combine an authentic watch with a fake Rolex box – unfortunately, this is often successful, because most people wouldn't even think of inspecting the box's authenticity as well.

There is no point in owning a fake box with a used watch, since the Rolex is likely safe stored away in a watch winder. Moreover, it can easily occur that the box or its paperwork are lost. People move, children may paint the box or an unwitting partner could dispose of the box during Spring cleaning – there are several potential reasons. Particularly if the watch has a few years behind it, a cardboard box can't be expected to last as long as the luxury watch itself. Nonetheless, trying to pass off a fake box to a watch in order to improve the return is common – especially with pre-owned Rolex watches.


Pay attention to the following characteristics on Rolex boxes: 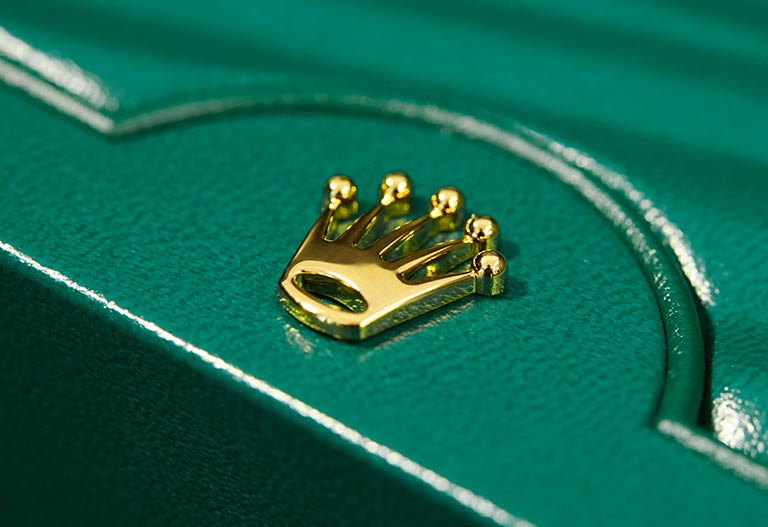 If the original box isn't an adequate option for displaying and storing your Rolex, or if you simply prefer the colour blue, we'd like to take this opportunity to show you one of Rolex's specialities. 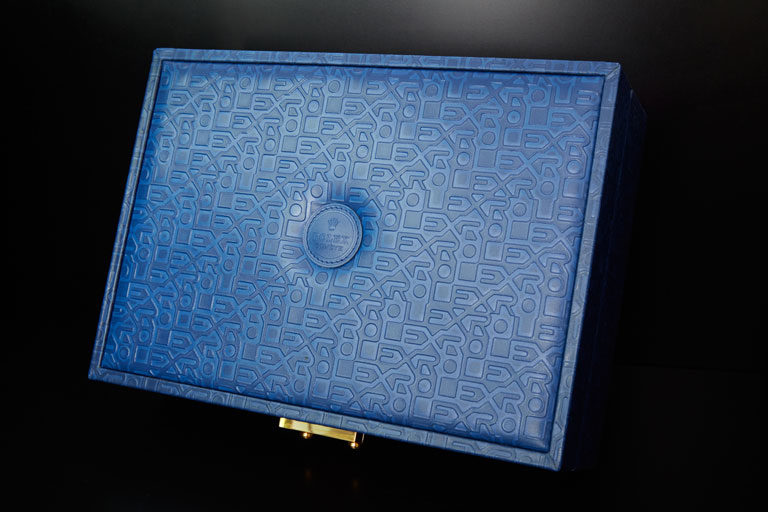 This stunning dream in blue is not an ordinary Rolex watch box, but a rare Rolex jewellery box. When this box is opened, your Rolex is enthroned in the centre, surrounded by light blue velvet. This box (Ref. 51.00.71) offers the possibility to place rings and brooches on the left and right inside. Additionally, the bottom can be removed to reveal compartments for further jewellery such as necklaces and bracelets. 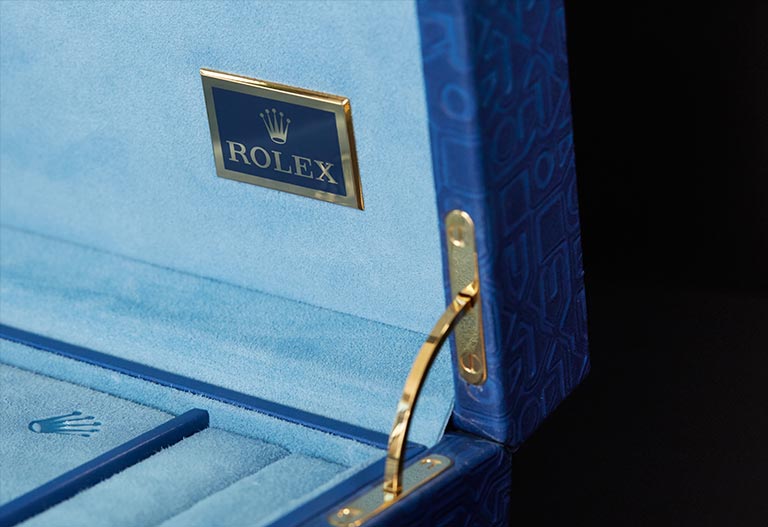 One special feature of this chest is the lock. While this is no high-security safe, it certainly protects from the curious hands of children. The handle of the small golden key is decorated with Rolex's five-pointed crown. With this blue box, you receive an attractive and unique way to house your jewellery, straight from the royal house of Haute Horlogerie. 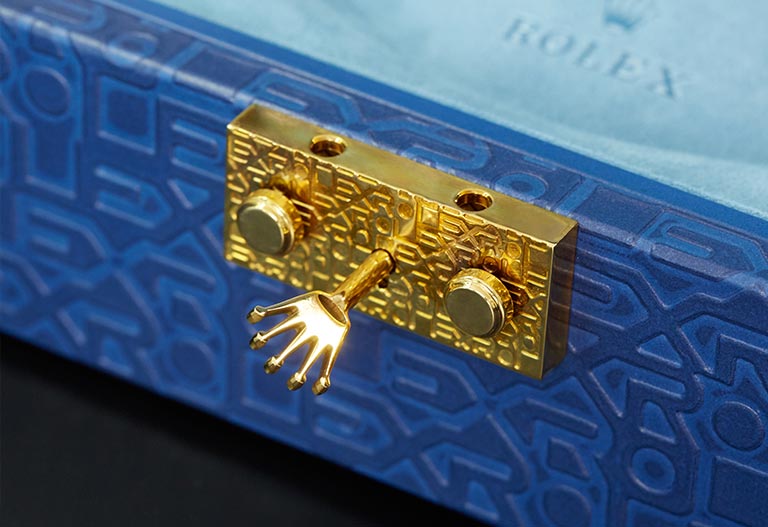 
Other manufacturers and their watch boxes 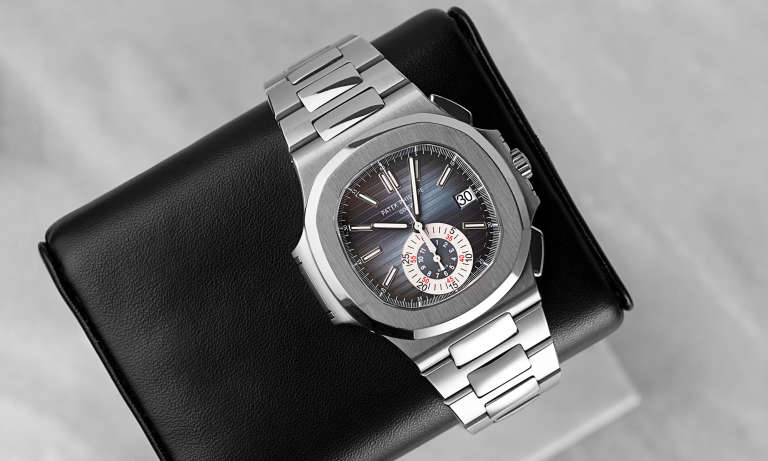 The World's Most Expensive Watch Brands

END_OF_DOCUMENT_TOKEN_TO_BE_REPLACED 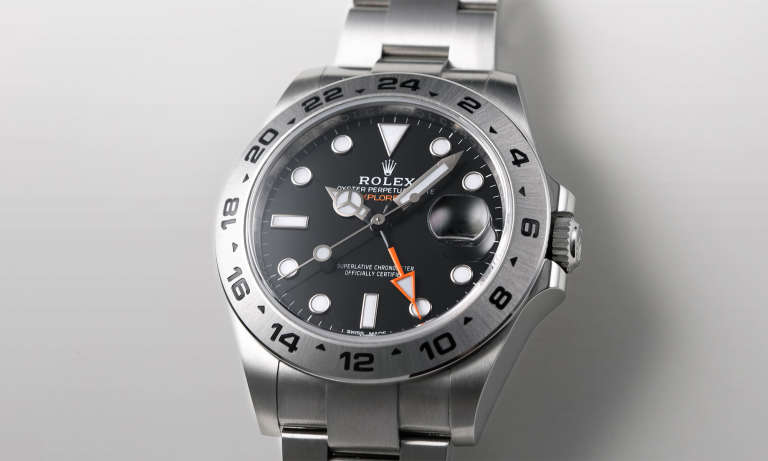 If you have only just started to get acquainted with watches, then you will regularly come across terms that are used casually, but are unknown to you – such as the term tool watch. The meaning seems obvious, but the answer to the question about the specific meaning of the term is not that simple. Let's try to shed some light onto this term and take a moment to feature some …

END_OF_DOCUMENT_TOKEN_TO_BE_REPLACED 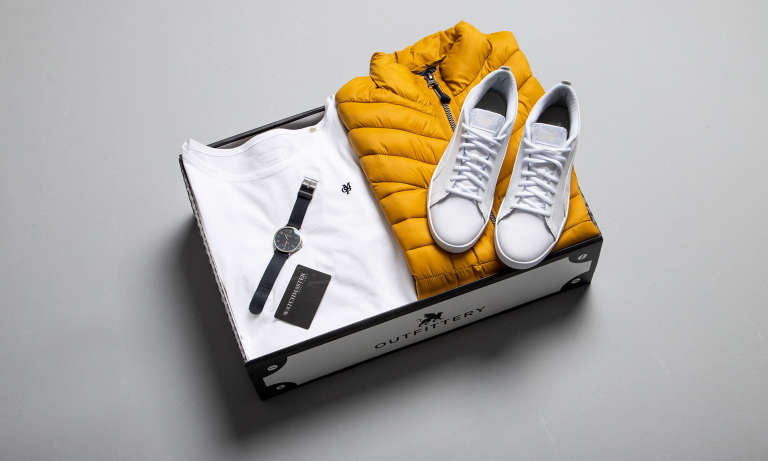 Buy your luxury watch now at a lower price than all the others & elevate your fashion outfit! …

END_OF_DOCUMENT_TOKEN_TO_BE_REPLACED 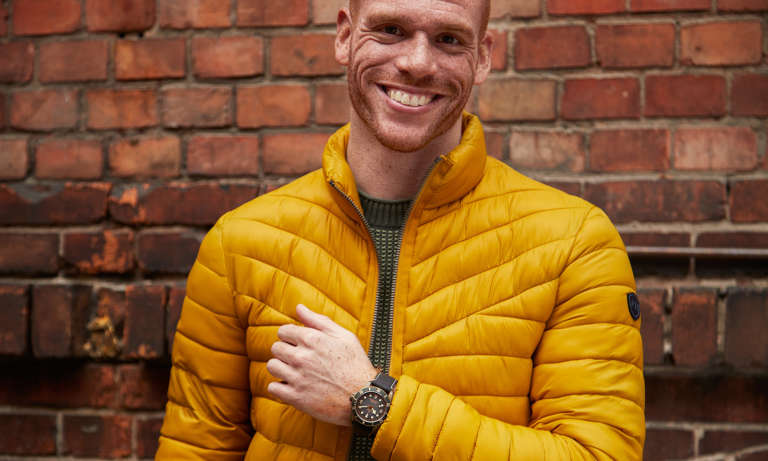 Great news: Watchmaster has teamed up with Europe's largest personal shopping service for men! Together with OUTFITTERY, we want to help you find a matching outfit at an even lower price compared to conventional shops. You haven't heard of OUTFITTERY yet? No problem, we'll tell you what to expect from this exciting collaboration. What is OUTFITTERY? OUTFITTERY is …

* Terms and conditions apply
All prices include VAT. If differential taxation in accordance with §25a UStG is applicable the VAT will not be reported separately.
Watchmaster ICP GmbH | Charlottenstraße 60 | 10117 Berlin | Germany
© Watchmaster ICP GmbH
# d0d9f0846