Even if you are a fan of motorsports or extreme sports rather than an enthusiast for the trends in the watch industry, you are likely to run into the Swiss luxury watch manufacturer TAG Heuer sooner or later. Founded in 1860 by Edouard Heuer in Saint-Imier under the brand name Heuer, the company has always been one of the largest and best manufacturers of fine timepieces with a sporty touch and boasts an eventful history. That gives us reason enough to share these ten reasons why we love TAG Heuer with you.


10 reasons why we love TAG Heuer

As early as in the days of the Roman coachman Scorpus, chariot races thrilled masses of people in the Circus Maximus. This has hardly changed to this day... Only that the amount of horsepower involved has increased from four to several hundred. The fact that the manufacturers of fine luxury watches are involved in motorsports is nowadays merely a matter of good taste. Still, hardly any other manufacturer is as closely associated with motor racing as TAG Heuer. Not only does TAG Heuer serve as the primary timekeeper for various racing classes or as a sponsor, but several of the best-known collections of watch models from the La Chaux-de-Fonds-based watchmaker have their origins in this sport. The DNA in the Monaco, Monza, Silverstone, Carrera, Targa Florio and Formula 1 models is all directly derived from their eponymous races and circuits. Motorsports enthusiasts therefore have virtually no choice, but to fall in love with TAG Heuer and its wide range of racing watches. 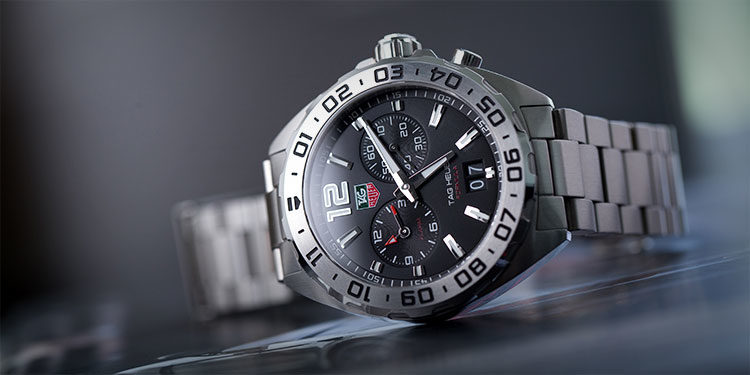 TAG Heuer's "Don't crack under pressure" advertising campaign has been running since 1991, and as a tribute to the dedication and determination of the brand and its brand ambassadors, the slogan stands for withstanding the psychological pressure that accompanies both TAG Heuer athletes and engineers every day in striving to achieve their goals. This is what TAG Heuer's timepieces stand for – not only the drive to withstand this pressure, but to face it and push oneself to the limit of what is possible. A motto that everyone can adopt when living their own lives.

Hollywood star Steve McQueen, famous from movie classics like "The Magnificent Seven", "Bullitt" and "Le Mans", earned the title of "King of Cool" during his lifetime. While in his role as the race driver Michael Delaney in the film "Le Mans", he wore a prominently displayed Heuer emblem on the breast of his racing suit and a TAG Heuer Monaco, then known only as the Heuer Monaco, with a blue dial. Ever since, this coveted TAG Heuer racing driver's watch has been inseparably linked to Steve McQueen and the world of motorsports – and is still an integral part of the product range today. 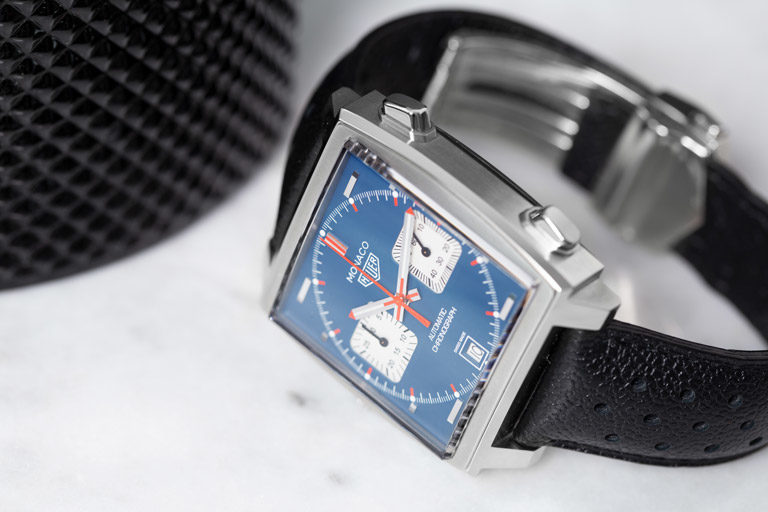 One of the world's largest and most famous watch brands has been boasting for decades that one of its models was the first watch on the moon. However, this is not enough for TAG Heuer. In accordance with the company's philosophy of always pushing the envelope, TAG Heuer is supporting the Chinese Mars expedition with the objective of sending an unmanned rover to the red planet in 2020. After a seven-month flight through space, the Mars Rover will autonomously collect and log environmental and atmospheric data for a period of three Mars months. Especially in the scope of a mission of this magnitude, 75 million kilometres away from Earth, reliable equipment is indispensable. It remains to be seen whether TAG Heuer will offer a "Mars Watch" as a counterpart to the renowned Moonwatch following the success of the mission. However, TAG Heuer has already advertised the TAG Heuer Carrera Heuer 01 this year.

5. TAG Heuer on the silver screen

The multi-part cinematic masterpiece "Nuit de la Glisse" by Thierry Donard transports the viewer into the world of extreme sports for a few hours. Breathtaking shots and a gripping soundtrack send the audience on a journey in which the heroes on screen are pushed to the limit and are unsatisfied with the ordinary. The guiding theme of the film series is TAG Heuer's slogan "Don't crack under pressure" and portrays athletes in the most daring situations. But even under the greatest pressure, these exceptional talents and TAG Heuer brand ambassadors withstand the pressure. This is a film with a message that is intended to inspire us all. 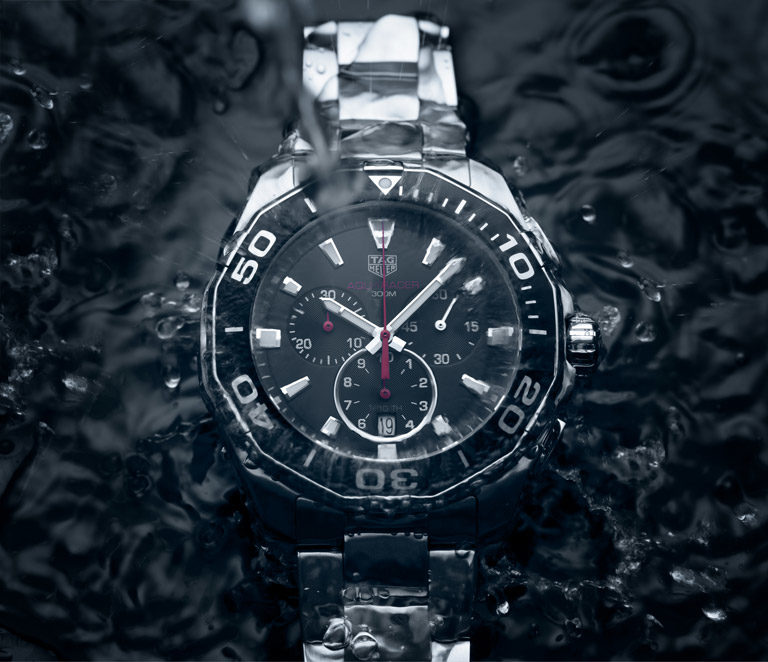 6. The connection to football

TAG Heuer is not only a household name in motorsports. The Swiss luxury watchmaker's involvement also extends to one of the world's most popular sports: football. Fans and players win and lose together, which regularly takes both sides to their limits. Whether as the timekeeper of the 2018 Asian Games women's football championship or as the watch partner and timekeeper of the Australian team Caltex Socceroos, TAG Heuer has established a broad presence in soccer. Even the world-famous British football club Manchester United is in partnership with TAG Heuer. These partnerships start with the sponsorship of individual tournaments and culminate into special editions dedicated to individual teams, such as the Carrera Calibre Heuer 01 Manchester United (Ref. CAR201M.FT6156). Sports enthusiasts can't help but notice the TAG Heuer brand – and a number of the football stars themselves have been unable to resist the charm of the Swiss manufacturer's robust timepieces.

7. High demands on oneself

When it comes to the fine art of watchmaking TAG Heuer has remained true to its company philosophy: "Reinvent the wheel every time you can!" This statement guides the research and development of the brand. Similar to the "Don't crack under pressure" campaign, this mantra can be adopted in daily life and reflects TAG Heuer's ambitious nature. And this slogan has already achieved some success. Had the company been content with its past achievements, developments such as the TAG Heuer Monaco V4, the first belt-driven mechanical watch, or the TAG Heuer Carrera Micropendulum, the world's first anti-magnetic double tourbillon, would probably never have come into existence. TAG Heuer definitely has earned more points for its innovative spirit. 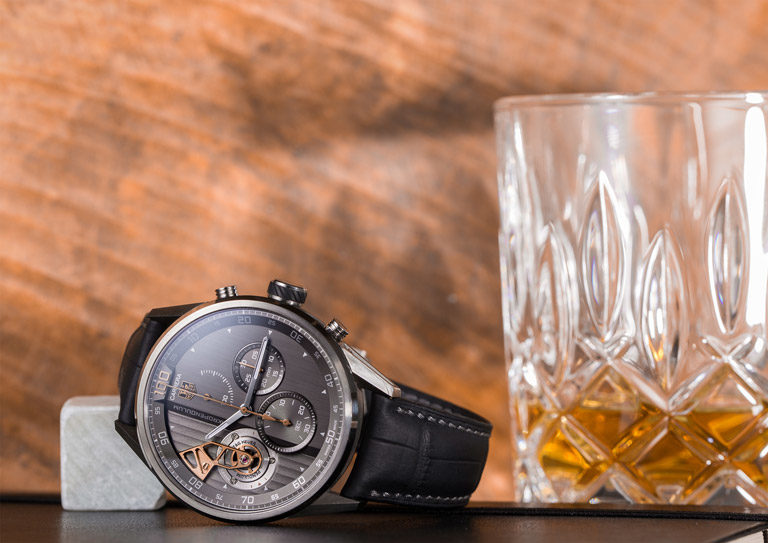 TAG Group SA was founded in 1975 and achieved worldwide fame by sponsoring a Porsche turbocharged engine with which the McLaren Racing team dominated the entire Formula One scene during the 1980s. In 1985, the luxury watchmaker, which had been experiencing financial turmoil and had existed up to that point under the name Heuer, merged with the TAG Group and TAG Heuer was created as a subsidiary of TAG Group SA. The name TAG Heuer is made up of the initials of the words "Techniques d'Avant Garde" and the name of the founder, Edouard Heuer. Both companies embody an avant-garde approach, which is why both companies have benefited from the merger. In 1999, TAG Heuer was sold to LVMH Moët Hennessy - Louis Vuitton SE for a staggering $740 million. Since then, the company has been part of the industry-leading luxury goods group, which includes other well-known brands such as Louis Vuitton, Givenchy, Fendi, Hublot and Moët & Chandon.

9. Innovations as a result of rivalries

The TAG Heuer Carrera has always been a chronograph for motorsports. Highly precise and perfectly tailored to the needs of racing drivers, it quickly conquered the racetracks of the world. However, from the outset, the Carrera was faced with a tough and unrelenting competitor. The Rolex Daytona was born in 1964, the same year as the TAG Heuer Carrera. The green light had been given for leading the world of motorsports. To this day, however, the winner of this competition has not been named – a fact from which we have benefited as beneficiaries of the numerous developments. Therefore, we will certainly be able to hope for more surprises and innovations from both companies in the future and are delighted with the healthy spirit of competition.

10. Always on the cutting edge of time

With the arrival of mobile phones and particularly smartphones, a new era has begun. You always have a phone, a calculator, a calendar and even a watch with you. Unfortunately, the necessity of wearing a wristwatch is gradually disappearing, which has inevitably caused problems for several manufacturers. Since the mechanical capabilities of a wristwatch are limited, a growing number of customers are turning to smartwatches. TAG Heuer was quick to recognize this development and launched the Connected Modular 45, which opens up the world of smartwatches to a wearer without forgoing the exceptional quality of a luxury watch. This logical, yet clear stroke of genius is our last, but in no way the least, reason why we love TAG Heuer.