There are some lesser-known watch brands which it is hard to find information about – and then, there is Rolex. So much has been written about Rolex that it has almost become misinformation. In case you have only browsed the numerous bestseller lists and might have missed something, we'd like to share five facts about Rolex that you might not know yet.


Did you know this about Rolex?

It is common knowledge that Rolex did not start as a watch manufacturer and was founded by Hans Wilsdorf as an import business for Swiss movements based in London. When the company moved to Geneva and started production of watches under the Rolex brand name, it was supplied by various specialized companies.

One of the most important suppliers was the Aegler company. It was founded in 1878 by Jean Aegler and his wife. The specialization of the company was the production of small ladies' watches with anchor escapements. Towards the end of the 19th century, Aegler succeeded in building a high-quality anchor movement, which had a diameter of only 20 mm. This was to lay the foundation for the successful spread of the wristwatch and was a perfect fit for Wilsdorf's plans, who had set his mind on establishing the wristwatch for men. For this, however, he needed movements for smaller cases. In Aegler, he had found a company that also met his high standards of precision. However, he requested that his brand name, Rolex, rather than the name of the manufacturer, be engraved on the movements. In 1914, the name of the company was then Aegler SA, Rolex Watch Company.

2. The Rolex that was delivered to a prison camp

Alongside the "Paul Newman" Daytona, the Rolex Explorer II (Ref. 1655) is commonly known as the "Steve McQueen", even though there is (still) no photographic proof in which the Hollywood actor actually wears the model. What is documented is that McQueen owned a Rolex Submariner, which he later bequeathed to his stuntman Loren Janes. Nevertheless, McQueen did in fact wear another Rolex model. In the movie "The Great Escape", he can be seen in character as Captain Virgil Hilts wearing a Rolex Speedking on his wrist. The film tells the story of a group of Allied prisoners trying to escape from a German POW camp that is considered inescapable. The story of the film is based on true events in which Rolex also plays a role. 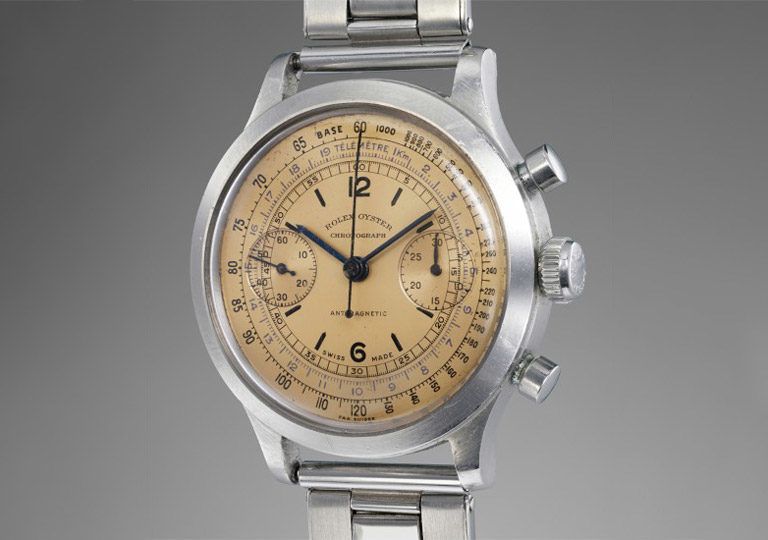 
Although Hans Wilsdorf moved his company from England to Switzerland during the First World War due to high customs duties and other reprisals, he remained connected to the country for the rest of his life. As one of the few watch manufacturers from the neutral country of Switzerland, he openly took sides with the Allies. He held this position with such conviction that he created a special program. Upon learning that pilots from the Royal Air Force had their watches – in particular Rolex models – taken from them when they were captured by the Germans, he called on those affected to contact Rolex so that their watches could be replaced. Since, according to the Geneva Convention, prisoners of war have the right to receive letters and parcels through the Red Cross, it was possible to send the soldiers the timepieces. The special aspect of the program was that Wilsdorf wanted to have the watches paid for only after the end of the war.

Corporal Clive James Nutting became particularly well known when he had a Rolex Oyster 3525 chronograph sent to him as requested in a letter addressed personally to the company's founder. This model was already a comparatively expensive model at that time. However, Nutting assured that he could pay for the model because he earned additional money as a shoemaker during his imprisonment. Four months later, the Rolex watch arrived in the prison camp, enclosed with it was a letter from Hans Wilsdorf, who apologized for the delay and lauded Nutting's choice. What Wilsdorf did not know was that Nutting had probably "ordered" the watch less for aesthetic than for practical reasons. It is assumed that he used the watch's stopwatch function to accurately track the guard patrols and plan an escape for 76 prisoners through a tunnel out of the camp. The meticulously organized escape from the "Stalag Luft III" camp in 1944 was ill-fated, however. Only three of the escaped prisoners actually managed to escape to safety. What remains is an extraordinary story. Nutting's Rolex and his correspondence with Wilsdorf fetched 66,000 British pounds at auction.

Imagine that NASA called you and told you that you were supposed to fly to the moon in three days. This actually happened to Jack Swigert. Three days before the launch of the Apollo 13 mission, the pilot of the command module, Ken Mattingly, was at risk of developing rubella and was replaced by Jack Swigert. Although the Omega Speedmaster was still NASA's standard watch, Swigert, a Rolex owner, took his personal GMT-Master 1675 "Pepsi" on the mission. Due to the accident on board and the dramatic rescue operation, the mission became world famous. 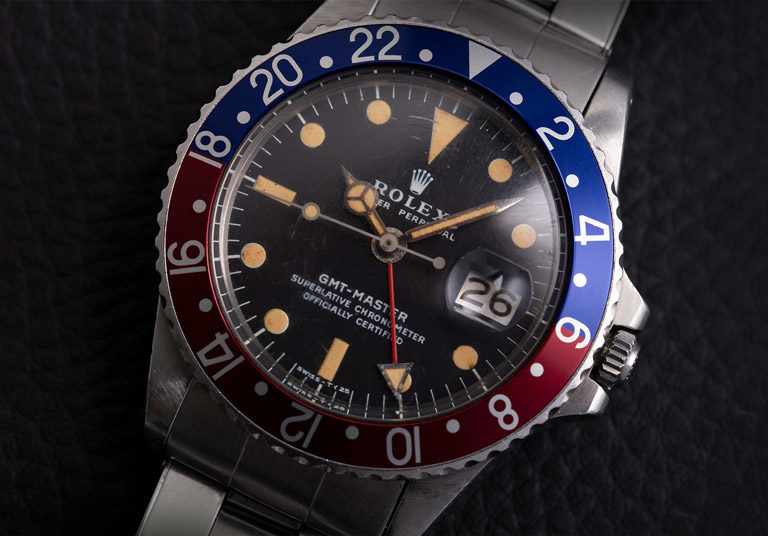 
In a photo, one day after the successful touchdown on earth, Jack Swigert can be seen standing next to Richard Nixon wearing the Omega Speedmaster and his GMT-Master. Later Swigert sent a personal letter thanking René Jeanneret, member of the Rolex Board of Directors, for ensuring that his watch reliably helped him keep the time.

4. The place where Wilsdorf thought of the name Rolex

Anyone who has studied the Rolex brand will certainly have been involved in a discussion about what the name Rolex actually means. One theory is that Rolex is derived from horlogerie exquise (in English, exquisite timekeeping). The company itself simply claims that it is a made-up name that can be pronounced the same in most languages. Far less well known is the place where Wilsdorf came up with that word. Wilsdorf revealed in an interview that he spent weeks thinking about a suitable name. He tried out all kinds of combinations of all the letters of the alphabet, but couldn't find one that matched. Then one day he was driving through London on the top deck of a horse-drawn trolley bus. While watching the activity on the street, he suddenly came up with the solution: the company would be called Rolex.

Tom Monaghan, the founder of Domino's Pizza, described in his biography how he gave one of his franchise holders his Rolex when the franchisee presented him with a weekly turnover of $20,000. This developed into the "Rolex Challenge", which rewarded winners with a Rolex Air-King featuring the company logo. Initially, the logo was visible on the dial, but was later placed on the bracelet as a stainless steel appliqué. 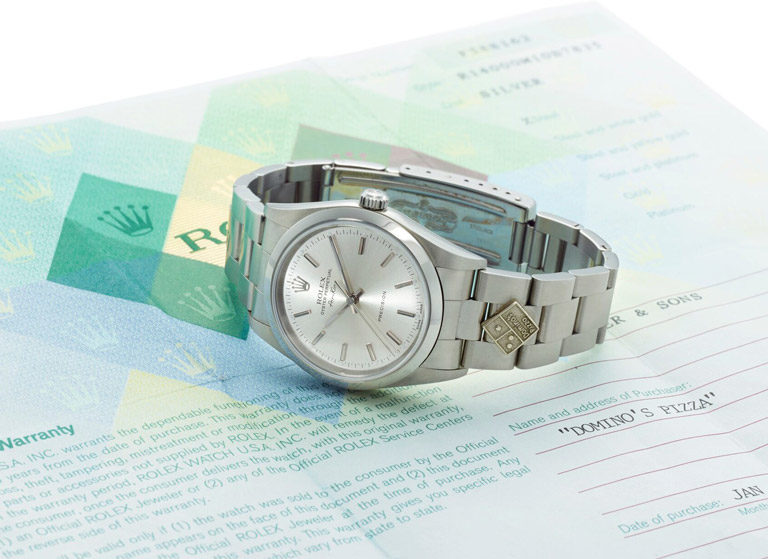 
However, as the value of a Rolex is constantly increasing, the conditions have changed a little. Now, a weekly turnover of $25,000 for four consecutive weeks is necessary to be awarded a Domino's Rolex. On average, a Domino's franchise has a turnover of approximately $17,000 per week. So it takes a few more pizzas before one receives a luxurious Swiss watch with Domino's logo. 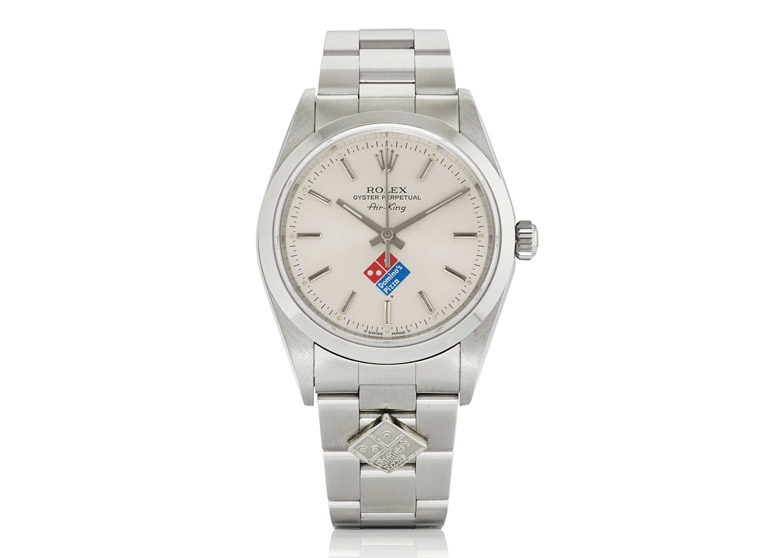