The renowned Moonwatch by Omega needs no introduction anymore. Although the series is known for its extensive special editions, the special editions in gold have remained relatively unnoticed. As a result, you can often find some of these models at an even lower price than the more popular stainless steel special models. All you need is the time and patience to find them.

We would like to briefly feature the special editions of the Moonwatch in gold. The reference numbers 3695.50 and 3195.50, which were part of Omega's regular catalogue as golden Moonwatches, have been excluded from this list.


The model was initially limited to 39 pieces and specially reserved for NASA astronauts involved in one of the lunar missions. On November 25, 1969, Omega hosted a dinner at the Warwick Hotel in Houston, Texas, where the watches were presented. The Apollo 12 astronauts, who were on their way to the moon at the time, were also awarded the timepiece on their return. On the back of the case, the name of the astronaut and the saying "to mark man’s conquest of space with time, through time, on time". are engraved in 18-carat yellow gold. The rose-red bezel was also only used on this model. By 1973, 1,014 copies were reported to have been produced, but only the first 39 copies had the special engraving. 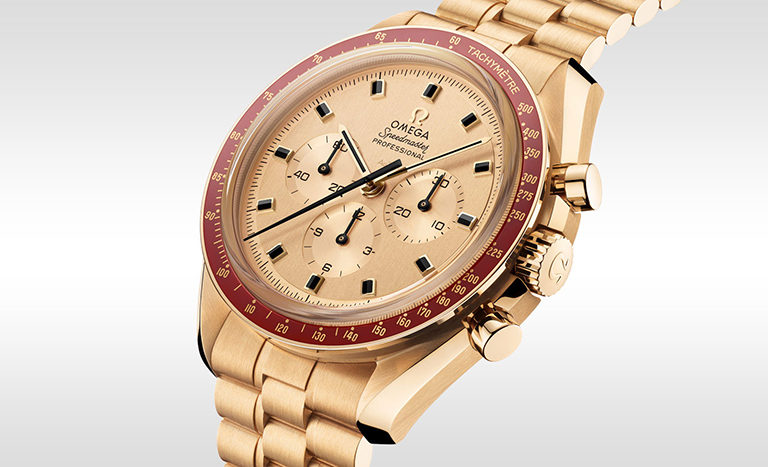 
The model was introduced in 1979, but only entered the market in 1980 and was in production until 1987. Omega celebrated the Apollo landing and NASA's re-qualification of the Speedmaster for the new space missions The Ref. 345.0802 was not a limited version, but was only produced about 300 timesduring the aforementioned period. However, half of these watches went to the German market. A special bonus: 20 models were produced exclusively in white gold – also exclusively for the German market. It was the first reference in the series that had an exposed back. The 861L calibreticks inside – the refined version of Lemania's classic 861 calibre.


In 1992, Omega celebrated the 50th anniversary of the 1942 launch of the 321 calibre. This movement was born in the Lemania's workshops as the calibre 2310 and developed by Albert Piguet and Jacques Reymond. It was not only used by Omega, but also Tissot and Patek Philippe. The movement was switched to a Lemania calibre 1873 in 1968 marking the end of calibre 321 before being revived by Omega in 2019. But let's get back to the Jubilee 27 CHRO C12, which was offered in two versions: 999 models were equipped with the calibre 863, while a chronograph version limited to 250 pieces was equipped with the COSC-certified calibre 864.


Another model that celebrated the Apollo XI missions was the Ref. 3192.30. The model was produced in white gold and limited to 500 pieces. It also contains the calibre 864.


This is the rarest model of all on this list and has been an exclusive passenger on the space station MIR for a year. The MIR was a space station built by the Soviet Union and a highlight of Soviet space exploration. After it was first used by the USSR and the East Bloc states, it began to collaborate with Western states after the dissolution of the Soviet Union and finally with the USA. Only seven of these models were ever produced: two with a gold bracelet and five with a leather wristband. Most recently, a model was auctioned at Antiquorum's OmegaMania auction in 2007.


That same year this model was released for the Italian market with a limited run of 200 pieces. The narrow golden borders bordering the totalizers visually unite the Ref. 3691.50 and Ref. 3197.50. The calibre 863 was also used for this model.


This model was regularly produced in stainless steel, but 150 pieces were additionally produced in 18-carat yellow gold. Unlike the stainless steel version, the yellow gold version has the Moonwatch engraving on the back. Both have the new hand-wound,calibre 1863, which adds a jewel to the calibre 863 and is also refined with rhodium. 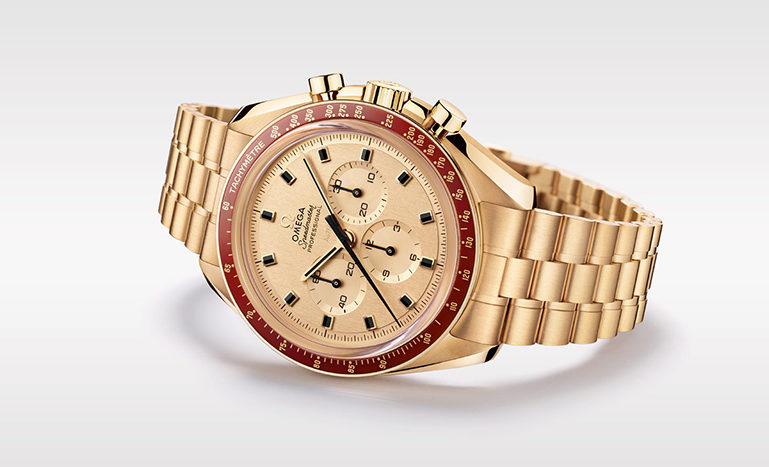 
This Speedmaster uses the same movement as the Speedmaster Professional Moonphase (Ref. 345.0809) that was launched in 1985, but features a beautiful white gold case. The model was in production from 1999 to 2003. The actual number of models produced is unknown. Inside, the Lemania calibre 1866 runs with an additional module for the moon phase.


The brand loves the Apollo-Soyuz mission so much that it also celebrated the 25th anniversary with a gold version. Ref. 3195.59 was limited to 50 units. Both the logo and inscriptions are printed in yellow gold. The back of the case comes without the customary NASA engraving, but instead with the name of the mission and the model number. The calibre 1863 is also used inside.


On January 16, 2017, Eugene "Gene" Cernan, the last man to ever walk on the moon, died at the age of 82 in a hospital in Houston, Texas. Omega wanted to pay tribute to him and released 1972 stainless steel models and 272 gold models. The back has been dedicated to Gene Cernan and the Apollo XII mission that took him to the moon. The Apollo XVII mission's gold medallion also sets the dial apart from its predecessors. The red 5:34 GMT engraving still is enshrouded in mystery to this day. It is believed, however, that this was the moment when Cernan made his famous speech as he left the moon.


It was to be expected that on the occasion of the moon landing’s 50th anniversary the brand would come up with something, but the golden special edition limited to only 1,014 watches surprised nevertheless. A new alloy called Moonshine™ Gold was used, which stands out with a warm and mellow yellow tone. It was used for this model's bracelet, case and dial. The bezel is made of burgundy red ceramic and the hour indices are set with black onyx. The transparent back displays the new calibre 3861, which is the upgrade to the famous calibre 1861. Naturally, the calibre is surrounded by the classic NASA engraving, which is additionally enhanced here by a world map view pointing directly to Cape Canaveral, the headquarters of the Kennedy Space Center. 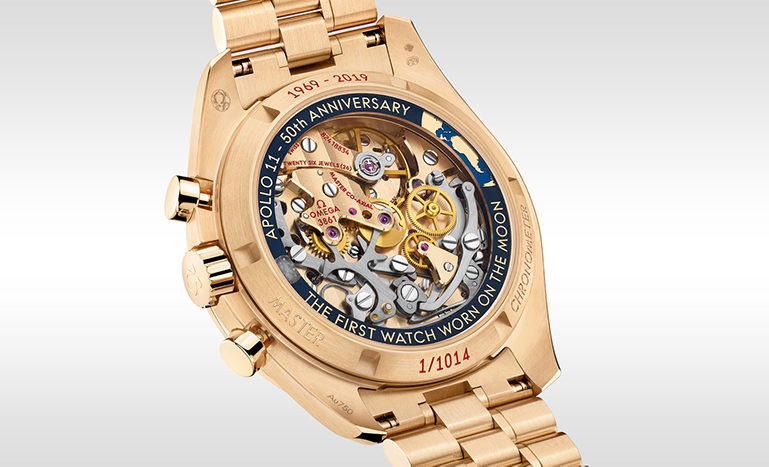