The world of luxury watches is also a world of superlatives. Which watch has the highest accuracy? Which the greatest possible waterproofness? And: Which model is the most valuable? At Watchmaster this place has been taken by the Grand Complications 5207P-001 made by Patek Philippe. In its immaculate appearance, this watch combines some of the most sophisticated complications that watchmaking has to offer, making technical mastery tangible. This post will introduce you to the world of the most exclusive timepiece available on Watchmaster.

What distinguishes the Grandes Complications?

Making complicated watches is the yardstick by which a company is measured. These watch models are a statement about the skill and interaction between design and craftsmanship. Despite being the undisputed leader in this segment, Patek Philippe raises its own bar again and again, culminating in models such as the Henry Graves Supercomplication or the Caliber 89 in the most complicated hand-crafted watches. For these models, watch experts also speak of „masterpieces, which bring watchmaking to the level of art“. In addition to the excitement of intellectual and technical potential, however, Patek Philippe always attaches great importance in not placing the spirit of innovation above the wearing comfort. And each piece of the Grandes Complications is designed to meet the highest technical requirements. 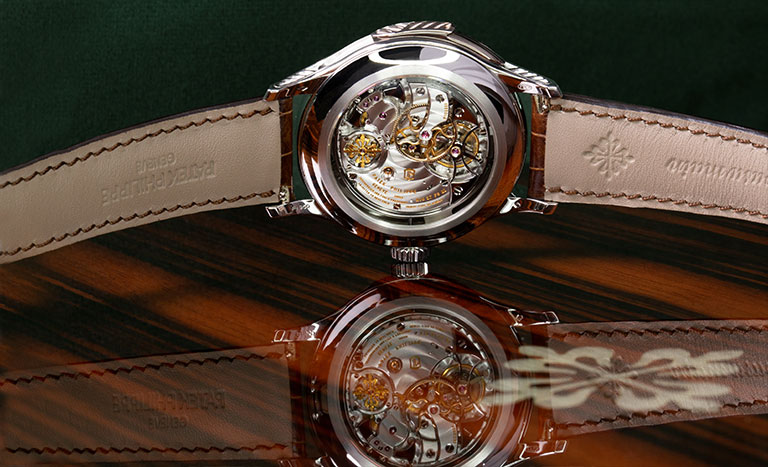 The Grand Complications Ref. 5207P-001 was unveiled at Baselworld for the first time in 2008 and then launched as the successor to the Grandes Complications Ref. 5016, which until then had been considered the flagship watch of Patek Philippe. The first thing you notice is the lively colour scheme of the platinum case with the hand-stitched dark brown alligator leather strap. The flanks of the case are decorated with an unruffled relief engraved by hand. This subtly elegant tone is picked up by the honey-golden dial, which gives a clear overview and a symmetrical division into the foreground. In the upper part are three date windows, while in the lower part, at 6 o’clock, the moon phases, seconds and leap years are shown. On the left flank of the case is a switch for the repetition. A slight click is enough to start it up. A simple process for the user, but in terms of internal movement it is intricately complex. In less space than on a pinhead, 250 parts were installed. These were adjusted to each other in several weeks of highly precise work so that the movements of wheels, cams, levers and pins result in an exact tone when the small hammers hit the gongs. Even a "simple" quarter repeater requires the full attention of Patek’s master watchmakers. The minute repeater even requires three times more effort. To make the distinction between minutes, quarter hours, and full hours possible the gongs are adjusted by exact bending and filing so that different sound pitches are created. In the 5207P-001, the hour is heard first with a low tone, then the quarters through double beats followed by the highest pitch from the minute hand.

Every model is personally checked and approved by President Thierry Stern before it leaves the factory. The built-in, instantaneous perpetual calendar is in no way inferior to the sophistication of the repeating mechanism. All parts of the date display switch at midnight in just a few hundredths of a second. In comparison, the 5016 model still worked with a slave pointer, pointing out Patek Philippe’s effort to develop its models steadily.

The third complication, the tourbillon, demonstrates Patek’s quest for accuracy, for which enjoys world fame. The tourbillon is a fine mechanical marvel that was invented by Frenchman Abraham Louis Breguet, to ensure the accuracy of lying watches wasn’t negatively by gravitational forces. If the balance point of the wheel and spring are not at the center of the balance wave then this can be problematic. Also, in wristwatches the "Whirlwind" became an appreciated, exclusive complication. On the back of the watch you can admire the perfect interaction of the individual parts. This appeals to the aesthetic sensibility of its user once again.

Of course, since its introduction, there have been even more complicated models, or more ornamental ones, but this is what makes the Grandes Complications 5207P-001 so special: It is a timeless, elegant piece that follows Patek Philippe’s corporate philosophy that generations of watch enthusiasts will appreciate. The limited number of produced models makes the 5207P-001 a very sought-after collector’s item, in which the opportunity to buy one, is almost an event in itself.