Smart Watch, Connected Watch – All about what they can and what they are

It was not so long ago that Apple released a watch on the market and brought it out off balance: In 2015, the American company presented the first Apple Watch. Of course, there were quickly a large number of alternatives, but most of them looked as cheap as they were. Or they were well made, but with a wristwatch they had nothing common anymore, more with a computer. That’s a fact shared with the Apple Watch, it is more an extension of the iPhone than an independent gadget.

Initially, the sector of smartwatches was ignored by luxury watch manufacturers. It would have nothing to do with traditional values of watchmaking. But in the meantime well-known manufacturers had to admit that they can not resist the prevailing trend of digitization. Simply launching a copy of the best-selling Apple Watch, however, did not meet the criteria of any large manufacturer, an individual path and design was needed.

So it came to the development of original timepieces with smart technology, which are able to connect to your own smartphone. Buyers of smart watches from a luxury watch manufacturer now have both in their hands: a high quality watch and a technical device.

Below are five well-known manufacturers and their smartwatches to help you understand the fascination of smartwatches.

The definition of a smartwatch

A smartwatch is more than just a wristwatch. Actually, there are hardly any watches that are not only an extension of our smartphone display. The smart wrist-worn computers are in constant communication with the mobile phone, notifying you of calls or emails, navigating or enabling the selection of the music that’s played. In addition, the smartwatch can be used to monitor your own fitness; functions that would otherwise have been taken over by a fitness tracker, are combined in the watch as well as social media activities. A conventional dial does not exist but there is a function to projected modern or classical dial onto the screen of the smartwatch.


In fact, TAG Heuer was the first Swiss manufacturer to include a smartwatch into its product portfolio. In the same year as Apple, the company launched the TAG Heuer Connected, in 2017 followed by the Connected Modular 45 and in January 2018 the smaller version Connected Modular 41. They all work with the smartwatch operating system Wear OS.

With the Connected collection, TAG Heuer has come closest to an ideal compromise between mechanical luxury watch and smartwatch. The case and the strap are qualitatively comparable with other TAG Heuer models, the Smartwatch module can absolutely keep up with the functionality. As a specialist in chronographs, we did not expect anything other from TAG Heuer than a range of timekeeping options such as stopwatch, timer or alarm.

Particularly noteworthy is the solution of the company to connect a smartwatch with the traditional watchmaking. Because for an additional charge in addition to the smartwatch a mechanical module is available, which the customer can then change at will or occasion independently.

But not only that, TAG Heuer also offers a wide selection of materials, bracelets, clasps, lugs, bezel and middle sections. So you can assemble your individual Connected, thanks to a flexible interchangeable system – all parts can be exchange underneath each other. Because this ultimately depends on the selected configurations. The base price of a TAG Heuer Connected is around 1,100 € upwards. 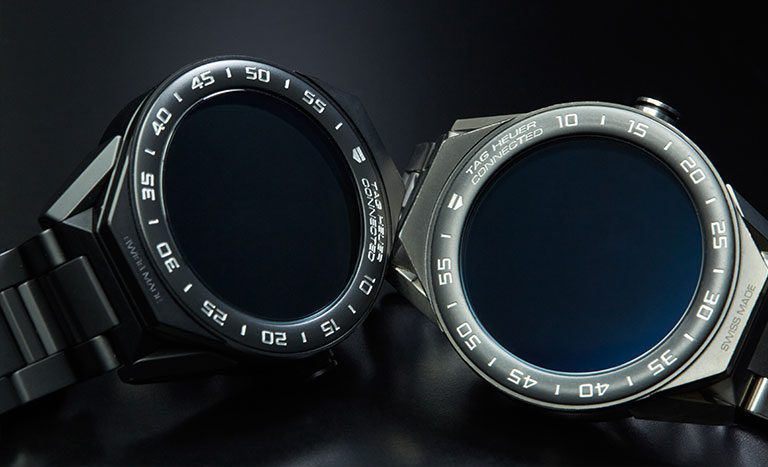 Also in the football world, a lot has happened in the recent years, for the 2018 World Cup in Russia, the goalkeeping technology was used. To this FIFA expressed a wish, namely a watch, especially for referees. This was then supplied by Hublot, the Big Bang Referee 2018 FIFA World Cup in Russia which supported the referees thanks to the network connection with video assistance and the so called “Goal-Line Technology”.

But even fans were not denied access: For them Hublot developed a modified software. The watch announced each match 15 minutes before the start, informing about change of players, goals scored and yellow or red cards. The dial was customizable, depending on which participating nation you favored. Also bracelets were, according to the flags of the nations, individually available.

In addition, the watch informs about incoming notifications of the paired smartphone. It uses the Wear OS operating system, but otherwise has all the features of a classic Hublot Big Bang: A complex titanium case and the stylized six H-shaped screws on the bezel. The alternatively selectable „analog“ dial corresponds to a real analog and mechanical Hublot Big Bang.

By eliminating a mechanical movement, the watch can be offered for € 5,100, making it by far the cheapest timepiece in the entire Big Bang collection.

Definition of the Connected Watch

The difference between a smartwatch and connected watch is that there are still real hands showing the time. The combination of smart functions in a classic design is a worthwhile affair especially for fans of traditional watchmaking who want to keep up with the trends. Despite analog time measurement, Connected Watches are technically up-to-date, connect to your own smartphone and transmit all data. But the display of the functions and their operation takes place in the app on the phone.

The premium brand Frederique Constant offers a connected watch – and proves that the term connected watch can be interpreted quite differently. Because the watch has only a classic analog dial, optically it is therefore actually not a Connected Watch. The performance takes place inside the case: The Swiss manufacturer has combined the renowned manufacture caliber FC-750 with an electronic module. The timer is now capable of detecting activity, sleep and transmitting it to your smartphone. Unfortunately, the connection between the watch and smartphone is only one-way, the watch does not inform about incoming calls or other notifications. For this, it transmits once a day all the data of the automatic movement to the corresponding app, so the owner knows whether everything is OK or if the watch needs to be modified.

In terms of price, the four different versions of the watch are between three and four thousand euros. 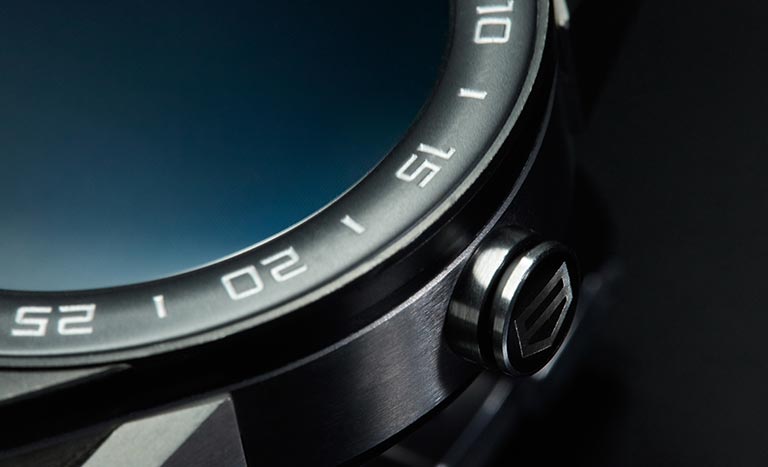 No new trend is complete without Breitling – as early as 2016, the company took part in the smartwatch market. The functions of the first edition of the Exospace 55 were adapted to the needs of pilots. On one hand, this was expected from Breitling as the brand is known for pilot watches. On the other hand, it was a perfect opportunity for the company to rekindle its connection to aviation. After such watches as the Navitimer for pilots became obsolete these days, a Connected Watch now offered many useful functions.

The new model Exospace B55 Yachting is now dedicated to the sport of sailing. Stopwatch, flyback function, lap timer and regatta chronograph are just some of the great functionalities. Once the connection is made with the phone, all times are transmitted and listed clearly in the app. The background idea for this is the simplified processing of the collected data. In addition, you can control the watch from your smartphone and set the time, time zones or alarm times.

Breitling has succeeded in balancing the traditional wristwatch: The watch is a three-hand model with two digital displays, inside which the in-house quartz caliber B55 works. The watch is available for just under € 7,000.


The Alpiner X is a hermaphrodite: In addition to an analog face, there is also a display on the dial for showing various functions. These include, for example, sleep, alarm, timer, compass or temperature. Using sensitive sensors, the watch measures temperature, altitude, air pressure and transmits the data to the app on the smartphone. In addition, the Outdoor Smartwatch informs about calls and other notifications. The heart of the 44mm wide fiberglass timepiece is the MMT AL-228 quartz caliber, with an original price of less than 900 €, it is also the cheapest Connected Watch presented here.

In a world that is increasingly digitizing, novelties like smartwatches fall on fertile ground. The manufacturer of luxury watches can not escape this. If they do, they renounce a trend that lasts longer than initially assumed. The traditional values of watchmaking may be important, should be preserved and passed on. But what would a world be without change and progress? As you can see, some well-known manufacturers are already eager to find an innovative compromise. A Smartphone already used by more than 2.1 billion people in the world anyway. The basic requirements could not be better to open up a new market!

But in the end, it is up to each one to decide: traditional analog or forward-looking digital?