Football is considered one of the most popular sports in the world, with stadiums regularly becoming the scene of real emotions even off the field. It is well known that football players earn very good money and willingly spend it on various luxury goods. In addition to expensive sports cars and exclusive penthouses, some professional athletes also like to invest in luxury watches. On the occasion of the Football World Cup 2018 we have already taken a closer look at the athletes and their watches.


Top footballers and their luxury watches

As the popularity of luxury watches among professional footballers seems to last, we would like to address this topic once again and examine some of the most famous football players and their watches in detail.

Mats Hummels: Timing is everything

As the official timekeeper of the German Bundesliga, TAG Heuer has chosen one of the best defenders in German football as its brand ambassador: Mats Hummels. The down-to-earth central defender of Borussia Dortmund and member of the German national football team, which won the 2014 World Cup, embodies the values of the Swiss luxury watch manufacturer like no other.

TAG Heuer stands for sportsmanship, performance and the will to constantly strive for further improvement – attributes that also apply to first-class footballer Mats Hummels. With his confidence and calmness while playing, he is the ideal ambassador for TAG Heuer's slogan "Don't crack under pressure" and certainly knows how to shine even in stressful situations. Accordingly, Hummels is wearing TAG Heuer off the pitch – a TAG Heuer Monaco Calibre 11 (Ref. CAW211P.FC6356) to be precise. The Carrera HEUER 01 series also seems to have appealed to the professional athlete. He was not only the face of the brand campaign, but is also frequently seen in private with a watch from this series. 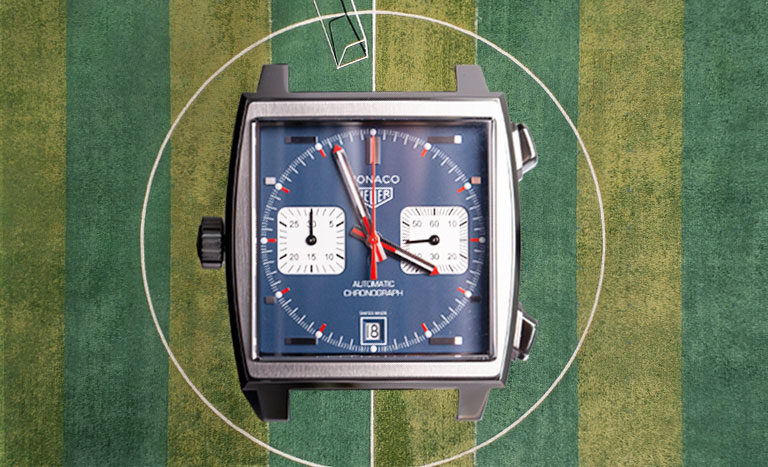 David Beckham is undoubtedly one of the most famous footballers of all time and is considered an absolute fashion icon. In addition to his outstanding performance on the field, he is also known for his excellent sense of styling. Whatever he has done, he has always pursued it with passion and constantly faced new challenges. That is why he is also a dedicated brand ambassador for luxury watches manufactured by the Rolex subsidiary Tudor. As Beckham himself, Tudor is never satisfied with the status quo and always strives to do better. 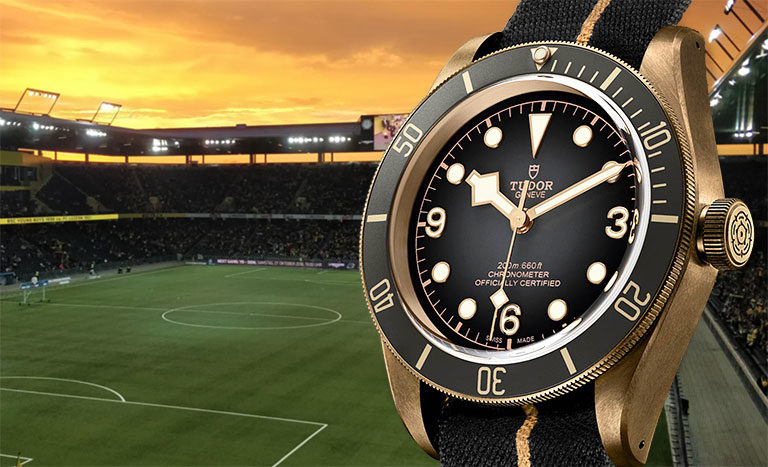 
But the former footballer did not only promote Tudor watches. Breitling also made use of his reputation as a celebrity. Following the slogan "The essence of Britain", the native Briton showed himself with a Breitling for Bentley B06 on his wrist. He did the same for the Breitling Transocean Chronograph Unitime, which leads us to the conclusion that Beckham clearly has an affinity for sporty luxury watches.

"There will be only one Pelé, Just as there was only one Frank Sinatra and only one Michelangelo." This quote comes from Pelé himself, probably one of the greatest footballers in the world. Outstanding achievements and an exemplary career make the Brazilian, whose real name is Edson Arantes do Nascimento, a living football legend.

For the now almost 80-year-old there is only one watch brand that he proudly promotes: Hublot. Both Pelé himself and the Swiss watch manufacturer Hublot stand for a mix of innovation and tradition, for the extraordinary and perfection. This is why the union of these two is celebrated with a watch that will make the hearts of avowed watch and football fans beat faster: a Pelé Limited Edition of the Hublot Classic Fusion. This all-black watch picks up the former jersey colour of the top athlete with fine yellow details on decorative stitching and on the hour markers. The dial also reveals a skeletonised football at 3 o'clock. The signature and stylized silhouette of Pelé are on the transparent case back. Even the black leather strap is packed with details: it shows the pattern of a football. 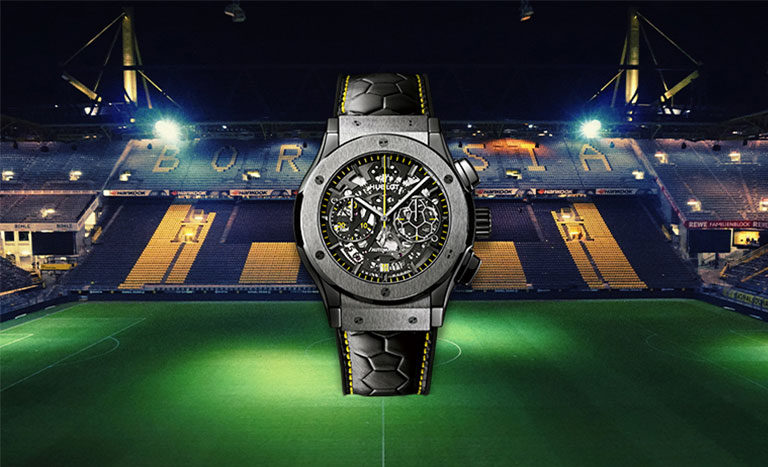 CR7 and his 1.6 million luxury watch

Cristiano Ronaldo, the exceptional athlete with the radiant smile, is not only one of the best, but definitely one of the richest football players in the world. His watch with the reference 7008 T INV C INV R is one of those timepieces which probably serve an aesthetic rather than a practical purpose. Franck Muller has created what is probably the epitome of luxury in this model belonging to the Round series. Completely set with diamonds and rubies, this extravagant watch has a price of almost 1.6 million euros and surely attracts a large number of paparazzi.

The Juventus star has a real passion for expensive watches. From extremely elaborate dress watches to functional sports watches – his collection contains a lot of items that will leave friends of exquisite timepieces speechless. Rolex, Audemars Piguet and TAG Heuer, to name just a few. The watch should fit the private jet or the luxury car after all, right? Only recently, a new watch has joined the CR7 watch collection – and Ronaldo would not be Ronaldo if this timepiece wasn't a very special piece of fine watchmaking. The Rolex GMT-Master II "Ice" is considered to be the most expensive Rolex watch so far with a price of 446,000 euros. This particular model is made of 18-carat white gold and entirely set with 30-carat princess and baguette-cut diamonds. 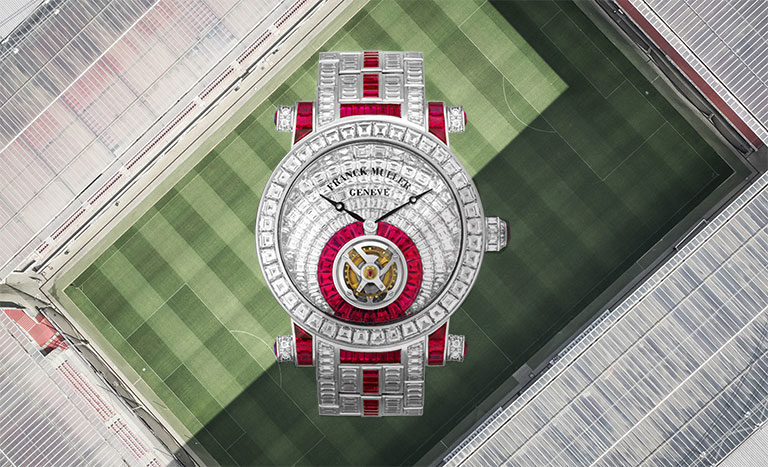 Jürgen Klopp and his wide variety of watches

Even off the football field at the sidelines, attention is paid to exclusive timepieces. Former BVB coach Jürgen Klopp now earns his money by training the team of the Liverpool football club. Also during his time as a trainer at Borussia Dortmund, the 52-year-old had a pretty good income, which he occasionally shows off with his watches – just like the footballers.

With regard to Klopp's collection of watches, however, one circumstance stands out in particular: The football coach focuses on personal taste. This may seem obvious at first, but it is not necessarily a fact. At a certain salary level, we often see the focus shifting to luxury items with correspondingly high prices. Of course, quality has its price, but high-quality watches do not necessarily have to be as expensive as a luxury sports car (or cost 1.6 million euros). Jürgen Klopp demonstrates this with an interesting collection of various wristwatches. This includes not only top-class timepieces such as an Audemars Piguet Royal Oak Offshore chronograph and a Patek Philippe Aquanaut, but also a Lehmann Intemporal positioned in the mid-price segment as well as a down-to-earth Casio G-Shock.

The hand (and watches) of God

Football legend Diego Maradona, who scored a goal in 1986 with the help of his "hand of God", marks the end of this list. The Argentinian superstar polarised during his football career because of his achievements as well as doping scandals, drug abuse, connections to the Mafia and his penchant for autocratic regimes.

Even today the 59-year-old gets the attention of the media. Compared to previous scandals, however, the reasons appear quite trivial now: Maradona is wearing not just one, but two luxury watches at the same time – one on each wrist. He often wears Hublot models, including the Big Bang Limited Edition Maradona – a limited collection of 250 pieces with colour accents in Argentinian blue, which sold out quickly during the 2010 FIFA World Cup. Although Maradona's watches change from time to time, the meaning remains the same: the former football player has two daughters who live in different time zones. Daughter Giannina lives in Madrid, which is why the watch on Maradona's right wrist is set to the time of the Spanish capital. The watch on the left shows the time in Buenos Aires, the city where his daughter Dalma lives. 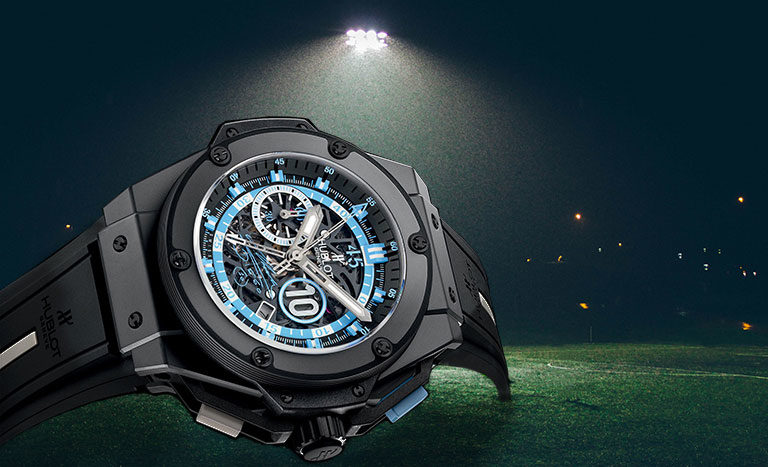 As we can see, the world of football does not seem to be all about the sport. The players themselves and their taste in fashion and accessories certainly provide plenty of topics for conversation off the football pitch.

Some might be upset that Ronaldo wears diamond rings and a watch with the value of a small Caribbean island, or that Maradona walks around with two Hublot watches. Once you have fulfilled your dream of owning your own home, a second residence and a decent collection of cars, why not invest in luxury watches? Before getting upset about things we simply cannot change, we should be glad that the world's top athletes are showing us the latest and most exclusive luxury watches of our time. We are excited to see which magnificent timepieces will be presented at upcoming football press conferences.