In 1926, 21 years after Hans Wilsdorf and his brother-in-law Alfred Davis founded the Rolex company in London, they finally achieved what had previously been considered impossible by creating the first waterproof watch – the Rolex Oyster.

How the Rolex Oyster laid the foundation for the brand

A hermetically sealed case and screw-down crown were designed to protect the highly precise, chronometer-certified movement from the rigors of the elements. And with success: the Rolex Oyster protects its interior such as oysters protect their pearls, hence the name Oyster.

To demonstrate the quality of his watch, the marketing genius Hans Wilsdorf had the Rolex Oyster displayed in the shop windows of retailers – in a goldfish bowl filled with water. But that was not enough for Wilsdorf: wanting to put his invention to an even harder test, he equipped the British swimmer Mercedes Gleitze with a Rolex Oyster when she announced that she wanted to swim the English Channel in 1927. Gleitze ended her swim after more than 10 hours in the water, fearing that she would be too cold and freeze to death, but the watch withstood the swim and remained undamaged. Wilsdorf took this stunning result as an opportunity to place a full-page advertisement for the Rolex Oyster on the front page of the "Daily Mail".

Not only did Rolex invent the concept of brand ambassadors with this campaign, but awareness of the brand exploded after the record was set. The victory of the waterproof watch over the wet and icy cold of the English Channel was on the public's mind and helped Rolex achieve the reputation it has today. 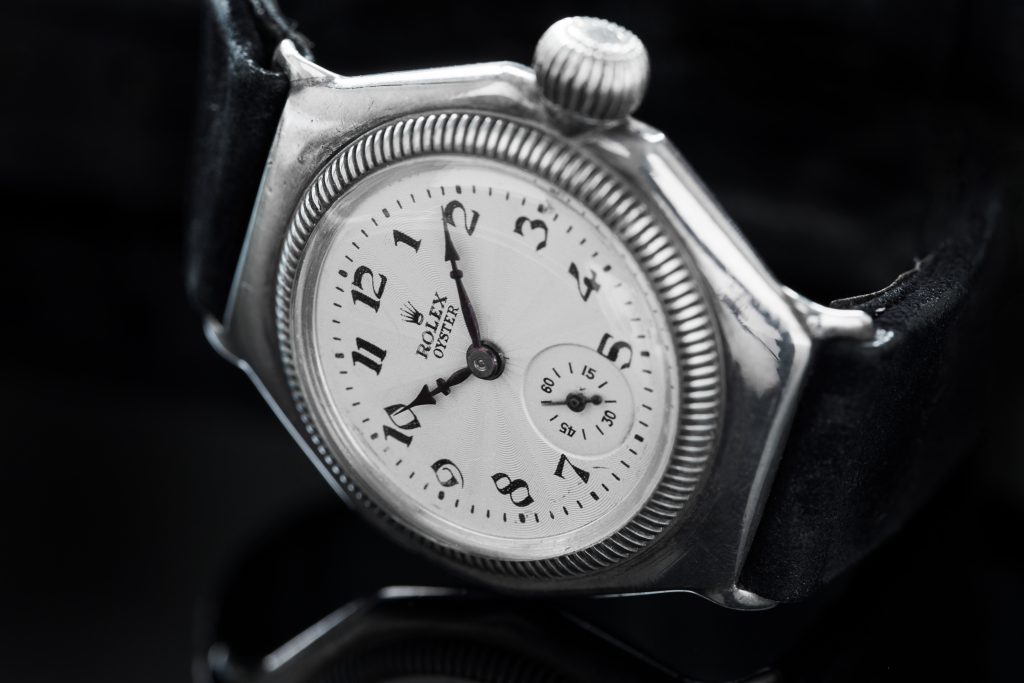 
An Oyster for eternity

The records of the Rolex Oyster

Before this point, watches were primarily hand-wound, but the first Rolex with an automatic movement called "Perpetual" took to the stage in 1931. This movement, housed in the case of the robust Oyster and part of every mechanical self-winding watch today, created the Rolex Oyster Perpetual – the watch that is still considered the cornerstone of Rolex's success today.

But once again, Wilsdorf was unsatisfied. He wanted to put his product through its paces and push it to its limits once again so as a result, the entire crew of the first Mount Everest flyover in 1933 was provided with Rolex Oyster models. Afterwards, the pilots were enthusiastic about the reliability and performance of the new Rolex watch.

After records in both the water and the air, another extreme test for the Oyster followed – this time on the race track. In 1935, Sir Malcolm Campbell, the world's fastest driver, was also wearing a Rolex Oyster Perpetual when he set the land speed record driving the "Bluebird" at 485 km/h in the Great Salt Desert in Utah. Campbell also praised his Rolex Oyster for its absolute precision despite the most demanding external conditions.

The Rolex Oyster Perpetual is still considered the archetype for universal and classic style. It is simple and solid, yet still technically brilliant. The exterior of the watch has also hardly changed over the years. An Oyster is and always will be unmistakably an Oyster. Even the dial proudly displays the words "Superlative Chronometer Officially Certified" at the 6 o'clock position.

The only major change that the Oyster has undergone in its history has been the development of a new, more durable material: 904L stainless steel, also known as Oystersteel. This case material does the Oyster justice and protects its core better than ever.

Over the years, the Oyster has been built upon several times and has provided the basis for some of Rolex's biggest icons. Some of these icons can still be traced back to the Oyster today, including the Rolex Air-King, the popular Datejust and Datejust II and the extremely durable Rolex Milgauss. All of these still rely on the legendary Oyster case today.

While the aforementioned models of the Oyster visibly follow a certain family lineage, the following expansions of the Oyster show their relationship in their name. The Rolex Oyster Speedking uses simple, but highly precise three-handed movements, while the Oyster Perpetual Date, Oysterdate Precision and even the quartz movement version, the Rolex Oysterquartz Datejust, add at least one window for the date.

The Oyster is still an essential part of the Rolex catalog to date and will remain so in the future. After all, a piece of that history lives in every single Rolex Oyster Perpetual today.