These days, it is as essential as the air we breathe: the bracelet of our wristwatch. But who actually is responsible for this invention? Was it the wish of a Brazilian pilot, the creation of a Parisian court jeweller or the idea of the man who made watches for Napoleon and Marie Antoinette? There are several theories about the inventor of the wristwatch. However, what is certain is that it took many years and there were many stages in the development from the first watch attached to a bracelet to the classic wristwatch as we know it today.

The first watches with bracelets

The origin of the wristwatch is not the work of a single person, but the result of several forward-thinking ideas that ultimately culminated in the wristwatch. In 1806, the Parisian courtyard jeweller Marie-Étienne Nitot made two bracelets set with pearls and attached a small watch to one of them. Abraham Louis Breguet made the first real wristwatch for Napoleon Bonaparte's youngest sister, Caroline Murat, in 1810, although the 12 on the dial still pointed towards the fingers. These watches were considered to be bracelets with a watch and are far from being classified as wristwatches. 80 years later, Girard-Perregaux developed a small series of wristwatches that were mounted on metal chain bracelets for the German navy. In 1904, Louis Cartier designed a timepiece at the request of the Brazilian pilot Alberto Santos Dumont, who dreamed of being able to read the time during a flight. The watch that resulted from this request is considered the precursor of the modern men's wristwatch and the basis for the renowned Cartier Santos. 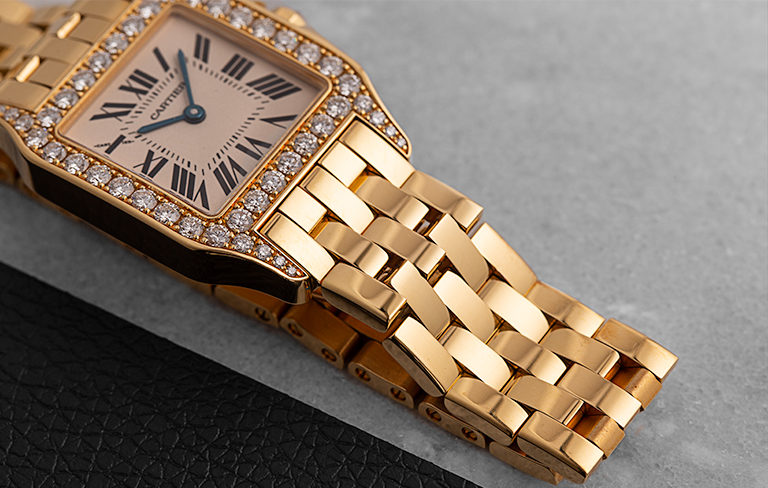 
Arguably, all of this would never have happened if it weren't for the bracelet. As a status symbol, piece of jewellery and means of payment, bracelets have played a role in the oldest civilizations. Nowadays, the bracelet with a watch has almost completely pushed the chains formerly used for pocket watches out of the market and replaced their function. Both for the simple task of fastening a watch to the wrist and for aesthetic purposes, the watch bracelet has become irreplaceable for the everyday watch.


The most common materials for watch bracelets

Among the materials used for watch bracelets, leather, metal and rubber watch bands have particularly established themselves due to their durability and aesthetic qualities. However, watch bracelets made of synthetic fibres such as nylon, so-called Nato straps, have also become very popular. However, colourful Nato watch straps have so far only been sporadically found in the range of well-known luxury watch manufacturers.

One of the most traditional methods of attaching a watch to the wrist is using a leather watch strap. Virtually every luxury watch brand has models with leather straps in a wide range of variations in its assortment. There are hardly any limits to the type of leather – even within the framework of legality. From traditional types of leather such as calf, sheep, goat, deer or pig to exotic leathers such as alligator, crocodile, lizard, snake, shark, ostrich or even ray, almost anything is possible. Aside from the aspect of fashion, leather also has the advantage of extremely high comfort and good durability.

Did you know that diving watches can also have leather watch straps? The most important factor is that they are hand-sewn upper leather with unsealed edges so that the water can also escape from the leather.

The metal bracelet – typically made of stainless steel – is one of the most popular bracelets today. In the 20th century, the manufacturer Gay Frères became an industry giant in the production of high-quality metal bracelets, and supplied some of the biggest names in Haute Horlogerie until Rolex acquired the company. Rolex' watch bracelets are still predominantly made of metal today. However, when it comes to their range of materials, the Swiss company also likes to offer variety. For example, two-tone variations in steel and gold are a frequently selected combination. In the world of luxury watches, bracelets made of precious metals are also widely used. 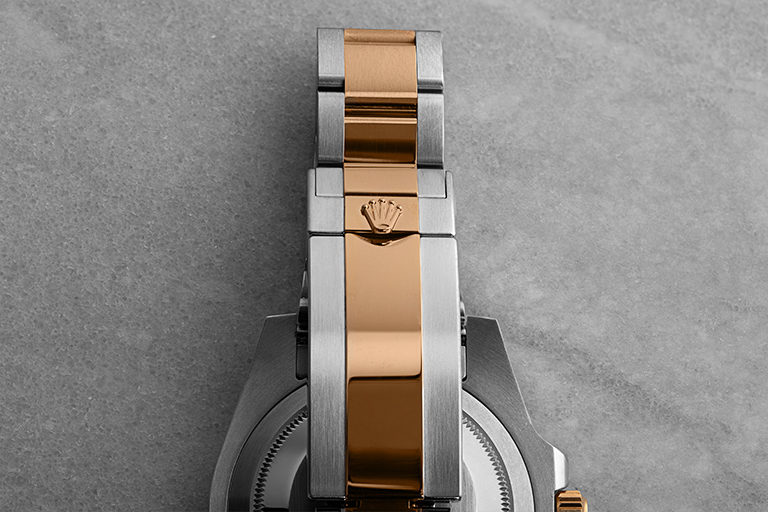 Rubber watch straps boast the advantage of being waterproof, skin-friendly, elastic while remaining extremely robust. In addition, there are no limits to the range of colours, patterns and the type of closing mechanism. Rubber bracelets can now be found in the range of virtually all luxury brands. The Swiss company Audemars Piguet is particularly keen to experiment with colours and patterns, such as camouflage patterns. A consistently growing fan base has resulted.

Finally, let's take a moment to discuss the Nato strap. Introduced by the British military in 1973, it was initially known as the "G10". Since it was originally developed for the military, two main qualities were essential: It needed to be safe and practical. The nylon strap with a tang buckle was only available in the colour "admiralty grey" when it was introduced. Today, similar to the rubber strap, there is practically no limit to the choice of colours and patterns.


Which types of fastening mechanisms are there?

In general, there are three main types of wristband fastening mechanisms. Among the most common ones is the classic pin buckle, in which, the strap of the bracelet is pulled through a buckle and fixed to the desired length by means of a pin attached to the eyelet like a belt. The pin can also appear with a double pin buckle, in which the strap is closed using two prongs, as the name suggests.

The butterfly clasp consists of two oppositely faced folding clasps, each of which secures a part of the bracelet and finally links them together in the middle of the clasp. This type of clasp is often found on leather bracelets. They have a very high quality appearance and are more gentle on bracelet materials, as the leather of the bracelet is neither kinked nor worn away at the eyelets. 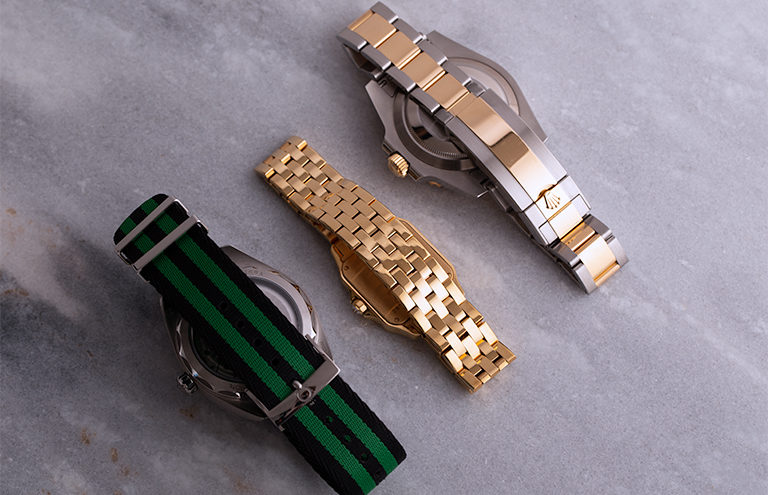 Watch bracelets can be usually changed quite easily and matched to your outfits. However, changing a bracelet can be more complicated on some watches than with others, which could make a quick bracelet change cumbersome. If that happens to be the case, it is not possible to switch to another watch with the desired bracelet material or colour, then it might be better to change your outfit. After all, the rule of thumb is metal and leather should match when choosing an outfit. This means that a watch with a brown leather strap should never be combined with a black leather belt or black leather shoes.

Watches with metal bracelets are simpler and more versatile. Although these may be too sporty for certain occasions, a slightly sporty-looking luxury watch can certainly loosen up an otherwise austere outfit. This is demonstrated, for example, by the Omega Seamaster 300M in stainless steel with a blue bezel and blue dial found on Prince William's wrist, who wears it almost every day and on almost every occasion. However, the rule of thumb for combining materials also applies to different coloured metals: a silver watch case usually does not match well with a gold belt buckle or a hammered metal ring.

Nato or rubber watch bands can also be a good complement to an elegant outfit. The best example of this is the watch worn by British secret agent Bond in the film "Skyfall". Here, he wears an Omega Seamaster on a grey and black striped Nato bracelet with his suit. 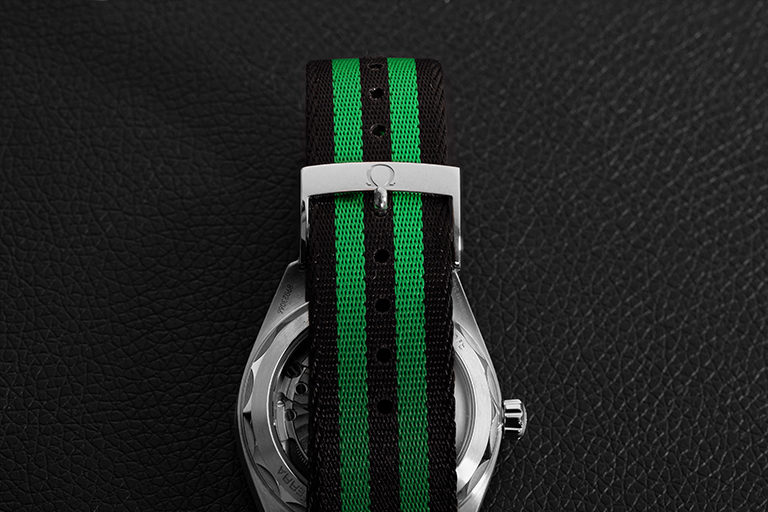 
Another point that should not be overlooked is the appropriate watch size. Petite models can quickly be lost on a sturdy wrist and look out of place. Therefore, before buying a watch, you should find out thoroughly which watch size suits you best. Of course, it is important to account for personal taste, but there are a few simple rules which should be followed – especially for social occasions.